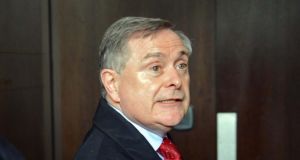 Minister for Public Expenditure and Reform Brendan Howlin hinted this morning he would bid for the vacant Labour Party leadership.

Eamon Gilmore announced his decision to step down yesterday in the wake of his party’s huge losses in the elections. The Tánaiste and Minister for Foreign Affairs made the announcement in Iveagh House after a meeting with Labour’s senior and junior Ministers.

Speaking on his way into Cabinet this morning, Mr Howlin said he would be part of the “reform” of the Labour Party along with colleagues. “I’ll be part of that. What role I’ll play I’m going to decide in the next day or two,” he said.

Alan Kelly, Minister of State for Transport, told Tipp FM this morning he will be running for either leader or deputy leader but has yet to decide. Backbenchers Arthur Spring and Dominic Hannigan have also expressed interest.

Minister of State for Research and Innovation Sean Sherlock has ruled himself out of the Labour leadership contest. In a tweet sent this afternoon, the Cork East TD said: “I wish to confirm that I will not be a candidate for the leadership of The Labour Party”.

His office also confirmed would not be seeking the deputy leader’s position.

Labour’s executive board will meet this evening to discuss the matter and the party is expected to have a new leader by July 4th.

Referring to the motion of no confidence in Mr Gilmore put down by a group of Labour TDs yesterday, Mr Howlin said he would have preferred the Tánaiste to have been given space for full reflection before any action was taken.

Leadership a choice now between Alex & Joan. Will discuss with family & supporters before making a decision on standing for Deputy Leader.

However, when asked if he shared Minister for Education Ruairí Quinn’s assessment that the rebels lacked “courage and decency”, Mr Howlin said he would not use language like that about colleagues.

Mr Howlin said he understood people felt hurt and emotional after a poor election showing. “There’s a rawness about the last few days,” he said.

Mr Quinn had earlier been highly critical of the seven TDs and one Senator who had proposed the no confidence motion. “It’s not the Labour way to have threatened to put down a motion without having the courage or indeed the decency to contact the party leader,” he said on his way into the Cabinet talks.

Mr Quinn, himself a former Labour Party leader, said Mr Gilmore had decided to resign but was not given the space to make his announcement in a timely manner.

The motion submitted to the parliamentary party meeting was signed by seven first-time TDs and one Senator.

Mr McNamara said this morning Mr Gilmore was a “very decent man”. However, he insisted the move had not been about Mr Gilmore’s future but the future of the party. “There had to be a change, not just rearranging the deckchairs, a fundamental change in generation of the leadership of the Labour Party and also its focus and direction,” Mr McNamara said.

He rejected claims from “party grandees” that Mr Gilmore had decided to step down before the motion was published. “The reality is they needed him to stay on to protect their own position. They were quite happy to do that at the expense of the Labour Party.”

Mr McNamara said at least three of the signatories could have expected to have been promoted to junior ministries in a reshuffle. He said he was not one but declined to name the three, whom he described as “courageous”. However, speculation would centre on Mr Nolan, Ms Conway and Mr Nash.

Meanwhile, Ms Conway insisted they acted in the best interests of the Labour Party, while Mr Ó Ríordáin said the decision was made “with a heavy heart”.

Ms Conway said there was no indication Mr Gilmore was about to step down when the motion was drafted. She said she felt she and other party members were not being listened to on social and economic issues that were affecting voters. “I think the vigour in which this government and the Labour Party went after Troika-nomics, we need to see the same kind of vigour and effort put towards the social issues that face us,” she told RTÉ Radio’s Morning Ireland programme.

Both Ms Conway and Mr Ó Ríordáin ruled out running for leader this morning, but told RTÉ Radio they would be interested in the position of deputy leader.

At least seven Labour TDs were last night reported to be considering entering the race to succeed Mr Gilmore as party leader, but the field is expected to narrow by the time nominations close on June 3rd.

The membership of the party is expected to face a choice of at least one senior Minister and at least one of the younger generation of Labour TDs.

Mr Ó Ríordáin tweeted that he believed the leadership race was between Ms Burton and Mr White.

Fine Gael Minister for Agriculture Simon Coveney, on his way into Cabinet, said he felt sympathy for Mr Gilmore but said “we’re pragmatists, we’re professional politicians” and would get on with the business of Government.