Minister speaks ahead of Cabinet meeting to discuss 30,000 new homes 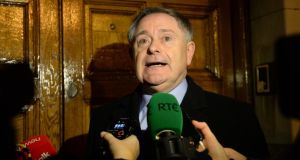 Minister for Public Expenditure and Reform Brendan Howlin described housing as ‘the biggest social issue we have to face’ Photograph: Dara Mac Donaill / The Irish Times

Minister for Public Expenditure and Reform Brendan Howlin described housing as “the biggest social issue we have to face” on his way into the Cabinet meeting.

The Cabinet is set to approve a social housing plan which will provide as many as 30,000 new and refurbished houses over the next four to five years.

Mr Howlin confirmed the package would be announced later this week by the Minister for the Environment Alan Kelly.

“I’ve said, the Labour parliamentary party has been telling me for a year, that it is now the biggest social issue we have to face. We have to provide decent homes for the people of Ireland, ” Mr Howlin said.

“There is a supply side issue because we’ve had no housing market for years. We now have a housing market again and people on modest incomes are being forced out of housing and that has to be addressed.”

Mr Kelly is bringing a memorandum on his social housing strategy to Cabinet.The memo will outline his plans for 2016 and succeeding years.

Government funding of €1.5 billion will make up most of the €2.2 billion spend until 2017, with the balance comprising €300 million from public-private partnerships and €400 million in off-balance-sheet spending.

Mr Kelly is expected to flesh out the details of how the €700 million PPP and off-balance-sheet funding will be raised. In addition, the source said the scheme would be “beefed up substantially” and geared to deliver more units over a longer number of years.

This figure could be as high as 30,000 over four or five years and achieved through a combination of new builds and refurbished local authority houses and flats.

The Government has plans to make 1,000 vacant dwellings available for new tenants in 2015.

The provision of new social and local authority housing has stagnated in recent years despite growing demand as a consequence of the recession. The department’s own assessment in 2013 identified 90,000 households “in need of social housing support”.