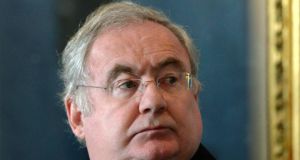 You sometimes wonder if Pat Rabbitte is Minister for Communications because he is responsible for all telecoms, broadcast and media matters in the State or because no other minister is more willing or accomplished in confronting the threat posed by a journalist’s microphone.

On RTÉ radio’s Morning Ireland on Tuesday he defended the new broadcasting fee by assuring listeners there were no longer any “cavemen” in Ireland who “don’t watch television and don’t access content on their iPad or their iPhone or whatever”. Before the summer break it was Michael McDowell who felt the lash of his tongue. Mr McDowell had been out defending the Seanad.

When it was put to Mr Rabbitte that he of all Ministers might appreciate a high standard of parliamentary debate, he replied: “There are and have been some very exotic birds in the Seanad over the years but whether we require a State- funded aviary for them to display their plumage, I don’t think so.”

Wide portfolio
However, Mr Rabbitte’s ministerial brief is far wider than just communications. His ministerial portfolio also takes in energy and natural resources and is one of the widest in the Cabinet. His concerns include the stewardship of the ESB and Bord Gáis, and issues such as fracking and oil prospecting in Ireland’s waters.

In an interview with The Irish Times, Mr Rabbitte conceded the Government’s ambitious plan to insulate a million homes in the State within seven years is unlikely to be achieved as envisaged.

The “Pay as You Save” insulation scheme (Pays) is a major policy plank of the Coalition’s programme for government as an initiative that would create jobs and have environmental benefits. Under the scheme, which is due to start next year, retrofitting work to homes would be completed first and then householders would pay for it as part of their utility bills for a number of years. The programme for government pledges to have a million homes in the State retrofitted by 2020 under Pays. But Mr Rabbitte said the outlook for the domestic side of the Government’s retrofitting programme is “not so positive”.

“It is reflecting the experience in other countries. In Britain, the ‘green deal’ [a similar pay-as-you-save scheme] has not been not so nearly as successful as expected,” he said.

The Minister will announce details of Pays in the autumn. “The concept was built on the conviction that savings accruing to households would remunerate the work done. “Now the evidence is mounting up that that won’t be the case.”

He said the retrofit schemes made homes more comfortable but the evidence was people were absorbing some of the extra savings into extra comfort.

“The equation of savings versus refurbishment won’t stand up. So we are designing a product that will be attractive but that will be realistic,” he said.

Until now, the Government has offered incentives to homes, mainly in the form of grants, which are being phased out in the run up to Pays. There has been a significant decline in domestic retrofit uptake. Some critics have said this has been because of reductions in the grant. However, Mr Rabbitte has said that the biggest factor is the recession. He has pointed to mild winters and the fact that those most committed to retrofitting have availed of the grants programme.

Electric vehicles
On the energy side, another big ambition of successive governments was a massive modal shift from gas-guzzling cars to electric vehicles.

“It is the case across Europe that the rate of uptake has not been anything like forecasted. The purchase price is still prohibitive. The ESB has continued with the roll-out of the recharging infrastructure. That is proceeding apace,” he said.

Turning to the communications side of his portfolio, he said technological convergence was exciting but not without its problems. “Advertisers are migrating online and segmenting the targets.”

He the broadcaster has undergone dramatic restructuring and is still in financial difficulties after the loss of 500 workers. “You can still see the size of the challenge.”