Higgins urges El Salvador to reject ‘amnesia about the past’ 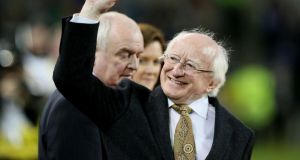 President Michael D Higgins has drawn parallels between the conflicts in El Salvador and Northern Ireland on his first visit to the Latin American country since 1982, saying it was important for the country “to reject amnesia about the past”.

In his first speech since arriving in the Salvadoran capital last night, Mr Higgins told the country’s president Mauricio Funes at El Salvador’s presidential palace that the Irish people knew well from the Northern Ireland peace process of the need “to understand the tasks of ethical memory”.

Mr Nunes commended the Irish President’s “tireless work” in defending human rights and his “profound love” for the Latin American region, and particularly his own country.

After receiving the award Mr Higgins said that, during his visit to the country in 1982, he had seen “the dead bodies of some of the poorest people of the world - as a consequence of the actions of some of the most power people in the world”.

Earlier, Mr Higgins had said he was delighted to return to El Salvador as President 31 years after he led an Irish parliamentary delegation to investigate atrocities during the country’s civil war and to see a country now firmly committed to resolving social and economic issues through peaceful means.

He was “deeply moved” to visit in “a time free from war, a time marked by political stability, and the opening up of new horizons of economic opportunities,” he said.

“We in Ireland are also aware that redressing the consequences of conflict takes steady, careful work, involving as it does not only conflicting memories and narratives of the past,” he said.

Mr Higgins said that it was also necessary to deal with “a legacy of material destruction, of economic marginalisation of certain social groups and communities.”

The President said that he and Mr Funes had spoken at a meeting earlier of the biggest challenge to fostering a thriving economy and society – the struggle against unemployment and, in particular, youth unemployment.

President Funes and his wife Dr Vanda Pignato greeted the President and Mrs Higgins on their arrival at the presidential palace. Afterwards they witnessed the signing of an agreement between Minister of State for Development and Trade and Development Joe Costello and El Salvador’s foreign minister Jamie Miranda.

Later today, Mr Higgins will speak to El Salvador’s parliament and at the University of Central America where six Jesuits, their housekeeper and her daughter were murdered by government forces in November 1989. One of the Jesuits, Armando López, had studied theology at Milltown Park in Dublin.

Mr Miranda and El Salvador’s ambassador to Ireland Werner Romero greeted Mr Higgins and his wife when they arrived at San Salvador airport from Mexico City last night. This is Mr Higgins’ second stop on a 12-day Latin American tour that includes a visit to Costa Rica on Saturday.

The President was presented with the keys to the San Salvador by the city’s acting mayor Gloria Calderon Sol de Onate at a ceremony at the airport that was attended by a large number of local media.

In January 1982, Mr Higgins, then a Labour TD led an Irish delegation comprising Niall Andrews TD and Senator Patsey Lawlor to El Salvador to investigate the massacre of about 1,000 people in the rural village of El Mozote in December 1981.

The efforts made by Mr Higgins to raise awareness of the killings in El Salvador helped influence the Irish foreign minister James Dooge to sign the Franco-Mexican agreement that recognised the left-wing guerrilla group, the FMLN, as a legitimate political force.

They were initially refused entry into the country but were later allowed in. They carried out interviews with Jose Napoleon Duarte, the country’s president, and Jose Guillermo Garcia, the defence minister, and examine the remains of victims of the conflict to report back on the atrocities internationally.

Tomorrow Mr Higgins will visit the grave of Archbishop Oscar Romero who was murdered on March 24th 1980 while saying mass after he called for an end to the killings in El Salvador’s conflict.

The country’s 12-year civil war between left-wing rebels and government forces backed by death squads was ended in 1992 by a peace agreement brokered by the UN.

In December 2011 President Funes’s government apologised to the Salvadoran people for the El Mozote massacre.

Sally O’Neill, regional director for Latin America at charity Trócaire, who helped Mr Higgins prepare for his visit 31 years, said that the Salvadoran people want “to give him the kind of welcome that he should have got in 1982.”

“Everyone says that they want to see him honoured because he was he first to speak out against US involvement. The way he was deported gave him a hero status,” said O’Neill, who was based in Costa Rica at the time of Mr Higgins’ visit and now works in Honduras.

“Michael D was seen as the voice of the voiceless in Central America at the time.”