Higgins cites ‘stripping away layers of troubled past’ 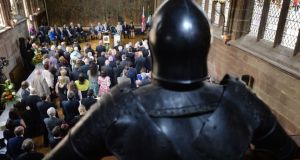 President Michael D Higgins speaks at the Guildhall in Coventry during the final part of his state visit to Britain. Photograph: Alan Betson/The Irish Times

Ireland and Britain “are stripping away the old layers of the troubled past” and creating new “hope and opportunity”, President Michael D Higgins has said.

Speaking at the end of the final day of his state visit, Mr Higgins said his “earnest hope is that our two countries will continue to tread the path of neighbourly friendship”.

Reflecting on the four-day visit, he said there had been “no attempt on either side” to affect some kind of forced amnesia: “that wouldn’t have authenticity”.

“We do have different versions of similar events,” he said, speaking in Coventry after a reception for the Irish community in the midlands city, to which he was accompanied by his wife Sabina.

Questioned about those in Ireland who may be reluctant to embrace Anglo-Irish friendship, he said: “We are not required to become involved in any amnesia.

“Think of all the things that we have in common. Just see all of the opportunities and the possibilities that are there.

“We are not required to be sentimental about each other all of the time. We can laugh at each other, but it is more important to have a good laugh at ourselves.”

Mr Higgins said he was “enormously moved” by the reception he had received and added it was clear from the start the British were “not just going through the motions”.

Questioned about the presence of Sinn Féin’s Martin McGuinness at Tuesday’s Windsor Castle dinner, Mr Higgins said it was important that all those who had been invited to the event participated fully.

“One would only have to speculate what it would have been like if we were here at the end of the visit explaining absences rather than presences,” he said.

The journey to build “mutual understanding and co-operation” was “not yet complete”, he said, but “current and future challenges” could be faced together.

The President said the state visit had, by its nature, an “essential share” of ceremonial formality. “But at its heart it has been about the warmest of relations between close neighbours.”

However, the visit had one sadness for him. “If I may be allowed a note of regret from this visit, it is that the late Seamus Heaney was not with us to witness it.”

Decisions about inviting a member of the royal family to attend Easter Rising commemorations in 2016 would be a matter in time for the Government, said Mr Higgins.

“I haven’t the slightest difficulty in recognising shared grief,” he said, adding he had thought of his father as he was being driven in a horse-drawn carriage to Windsor Castle with the queen.

His father, John, was an IRA intelligence officer in north Cork during the War of Independence, breaking with his brothers in the Civil War that followed when he took the anti-Treaty side.

“I thought of my father, to tell you the truth, I thought of my uncles; the terrible fact that they were on different sides went through my mind,” he told reporters.

Paying tribute to the Irish in Britain, the President said he had always been impressed by their resilience even when Northern Ireland “cast a dark shadow” over British-Irish relations.

His twin sisters left Ireland for Britain during the 1950s. He now has “nephews and nieces” in Britain, some of whom have married immigrants from African countries “and Belgrade”.

“It is a joy to note that there is virtually no aspect of British civic or political life that has not been enriched by contributions from the Irish community,” he said.

The “monuments to the labour of Irish workers” can be seen throughout the cities and countryside, from motorways, to offices and housing.

“The phrase ‘the men who built Britain’ was more than an idle boast. It was a statement of pride in the reputation for industry and capacity for hard work rightly earned by our people.”

In marking the successes of the Irish in Britain, he said it also had to be recognised that for some people, migration from Ireland was painful and traumatic.

“I thank you for your fidelity to your homeland; for your solidarity to each other; and for the contribution you have made to the warm friendship that now exists between Ireland and the UK,” he said.