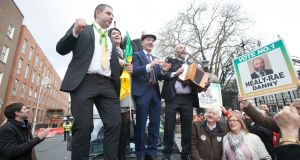 Johnny, Michael and Danny Healy-Rae celebrate on the first day of the new Dáil, in March. Photograph: Alan Betson

Independent TDs Danny and Michael Healy-Rae have been criticised by Fianna Fáil for attending funerals of people they do not know and for sending so-called “bereavement packs” to families in Kerry.

The criticism was led by Fianna Fáil councillor Michael Cahill, who said he had an issue with politicians, including the Healy-Raes, going to the funeral of someone they did not know as it was an insult to the deceased.

Mr Cahill said his sister had received a “bereavement pack” from the Healy-Raes when her husband died recently. The packs include a poem, a Mass card and practical information such as details about funeral grants, pensions and other social welfare benefits.

“I wasn’t one bit impressed with that,” Mr Cahill told Radio Kerry. “Unless I know the deceased or a member of the grieving family, I won’t go [to the funeral]. It is despicable behaviour and actually an insult to the deceased and the family.”

Mr Cahill said the issue was not the number of funerals attended by the Healy-Raes but that they attended funerals where they were not known. He added the funeral packs were the subject of much discussion in Kerry.

Michael Healy-Rae said neither he or his brother attended funerals of strangers and defended sending out the funeral packs.

“The truth is I do know everyone whose funeral I attend . . . we do know the people,” he said.

On occasion, the TD brothers and their nephew, Johnny, a councillor, have been known to attend a number of funerals in a day. Sometimes all three turn up at the same removal. The brothers left the general election count to attend one.

It is noted in Kerry that the Healy-Raes have a habit of signing a funeral visitors’ book in red or green ink.

The criticism by Fianna Fáil reflects the party’s decision to adopt a more robust approach to the Healy-Raes.

Recently, Cllr Maura Healy-Rae was denied the mayorality of Killarney with the help of Fianna Fáil. Ms Healy-Rae who was co-opted onto Kerry County Council after the election of her father Danny to Dáil had expected to assume the office of mayor in June as part of a pact entered into by Danny in 2014.

However, Fianna Fáil said the agreement “ended the day Danny Healy-Rae ceased to be a member of Kerry County Council” following his election to the Dáil.