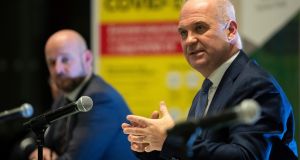 Tony Holohan is central to the team’s operation and that’s why the Government pushback has been personally directed at him. File photograph: Collins

Information is the currency in Government, and news travels fast. Within hours of its conclusion on Wednesday, word was swirling around official circles about a fiery meeting between senior Government officials and the chief medical officer Tony Holohan.

Some of the officials present expressed in blunt terms their own displeasure – shared by their political masters – at what they see as attempts by Holohan and his colleagues on the National Public Health Emergency Team (Nphet) to “box in” the Government to a more cautious, conservative and ultimately restrictive policy corner.

Martin Fraser, secretary general of the Department of the Taoiseach and the most powerful civil servant in the whole Government apparatus, made his feelings clear. Robert Watt, the top official in the Department of Public Expenditure, also weighed in.

“Went mental,” was one official’s report. “A humdinger,” said another.

Fraser is said to have been critical of the number of times that the team members appeared in the media, where they had been pushing the need for caution in any opening up.

Two days before, Mary Favier, a GP who is also a team member, told RTÉ: “We really need to follow our public health officials in this area, they are the experts.”

Various other team members and allies appeared on the airwaves in the following hours and days to warn about the need to heed its advice.

Whether they knew it or not, the media campaign – and that’s how it was seen – was raising hackles in Government Buildings.

People in Government believe this is a careful and deliberate strategy by the public health experts to push the Government towards a more restrictive and cautious reopening.

Holohan is central to the team’s operation and that’s why the Government pushback has been personally directed at him. He is, say people who have worked with him, forceful and focussed; they also say he is reluctant to take no for an answer.

“He’s like Hizbullah, there’s no negotiating with him,” laughs one official, who speaks highly of him. But ultimately, as officials have been reminding him, it’s the Government that makes the decisions. Holohan knows this, which is maybe why the team seeks to make its case in public.

The differences between the two sides are not just about what should be done in the future, they also concern the recent past. The Government side believes that the “Level 3-plus” restrictions are what brought the recent spike in infections under control. The team insists that it was “anticipatory behaviour” – expectation of the lockdown causing people to modify their behaviour.

There is also a suspicion in Government that the team is not sharing all the data it has. There are many reasons for its suspicion – not least the fact that the team was insisting on a lockdown when the numbers were just at their peak. Sharp-eared Government officials heard RTÉ’s George Lee – a journalist with a special insight into, and affinity for, the team’s thinking, it might fairly be said – say that “Nphet have far more numbers than what is published”.

In a not unrelated development, the Department of the Taoiseach has commissioned its own data marshalling operation.

Consultants EY have been drafted in to crunch the data in order to get a clearer picture of exactly where infections are occurring. The idea is, according to sources familiar with the brief, so that commercial areas shut down but posing little risk of spreading infections can be allowed to open, and stay open.

This is not just a matter of clashing personalities, compelling and all as people in politics find that narrative. There are and have been substantive differences between the politicians and the public health experts about the best approach to managing the pandemic, and how those choices play out has a direct effect on people’s lives.

It will have a direct effect on how people celebrate Christmas. The team-Government relationship, scratchy and suspicious though it may be, is a locus of huge power.

According to a source familiar with the group’s thinking, the team was “genuinely spooked” by the recent stalling in the decline of daily infections reported. After peaking on 1,200, daily cases tumbled for three weeks, before starting to creep up again.

But the change in trajectory was seized upon by team officials as a reason for caution – immediately conflicting with the desire in Government to have as broad based and enduring an opening up of society as possible.

It’s a simplification – but not a misleading one – to characterise the differing priorities of the team and Government in this way. That has been the cleavage between the two sides since before they fell out over the last lockdown.

And that, broadly speaking, will be the division between the two sides next week as the plan for opening up, for Christmas and for beyond, is finalised. Indoor hospitality – restaurants and pubs – travel restrictions and the pace of reopening are likely to be the key battlegrounds.

“Everyone’s getting ready for it,” says one person who will be involved in the discussions. “All set for a big scrap next week.”