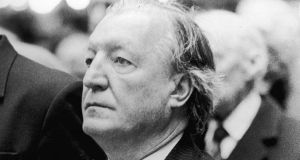 A British foreign office memo on the possible return to power of Charles Haughey as taoiseach in 1987 concluded that his “poor” record on the economy would mean he could be expected to “play to the gallery” on Northern Ireland.

The unsigned memo dated January 5th, 1987 is among previously confidential files released today in Belfast by the Public Record Office.

The anonymous author predicted that while Haughey could be expected to treat Anglo-Irish issues “more toughly”, he would be “unlikely to do anything so unpopular and retrograde as to denounce the [Anglo-Irish] Agreement”.

The memo noted: “He has recognised the Agreement as a remarkable achievement, the conventional wisdom being that his major regret is that it is not his signature at the bottom of it. To bring down the House while the Agreement is still popular would play into the hands of Unionists.”

This would not be welcomed by either the vast majority in the Republic nor the SDLP, the memo continued.

The anonymous author noted Mr Haughey’s relations with the SDLP were “strained” due to his “destructive line” over the Anglo-Irish Agreement. “But there is a good deal of common – and green – ground between them”.

Other declassified files reveal the coalition government of Garret FitzGerald was considering the introduction of an antiviolence declaration to curb Sinn Féin in the Republic.

The issue surfaced at a meeting between the Northern Ireland secretary of state, Tom King, and the senior Irish diplomat on the Anglo-Irish Secretariat, Michael Lillis, in London on February 11th, 1987.

They had agreed to meet to discuss possible British moves to deal with Sinn Féin’s presence on local councils in the North. This was exacerbating the unionists’ refusal to conduct normal business in protest against the Anglo-Irish Agreement.

The memo notes: “Lillis expressed surprise that a declaration against violence only applied to district council elections and said that such a declaration could not be ruled out in elections in the Republic.”