Haass knows outside involvement is key to agreement in North 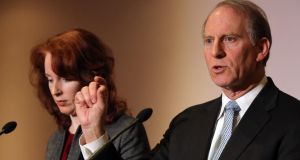 US diplomat Richard Haass with Harvard professor Meghan O’Sullivan, speaking to the media at Stormont Hotel in Belfast, where he is chairing negotiations dealing with contentious flags, parades and the region’s troubled past. Photograph: Paul Faith/PA Wire

Richard Haass and Meghan O’Sullivan have history on their side when it comes to breakthrough deals. “Outside” involvement has been central to any significant political development in Northern Ireland history since the fall of the old majority-rule Stormont.

The two governments, the US, the EU and a range of international figures from Scandinavia to South Africa have, at various stages, helped the Northern parties do what they have never done alone – agree. No doubt that is why Peter Robinson and Martin McGuinness invited Haass, a former US special envoy under president George W Bush, to return to Belfast to help them confront three policy areas which have proved intractable for the Stormont Executive – flags, parades and legacy issues arising from the Troubles.

As academics, Haass and O’Sullivan know the lessons of Northern Ireland’s recent history. But as skilled negotiators and, in Haass’s case as a diplomat, they also know how influential outsiders can be in doing deals in Northern Ireland.

The British and Irish governments shepherded the power-sharing accord at Sunningdale in 1973, the Anglo-Irish Agreement of 1985, the Downing Street declaration in 2003, the subsequent Framework Documents and the Belfast Agreement in 1998.

As co-guarantors of that breakthrough agreement, the two governments, with US support, have retained a central role in fostering greater co-operation in the North. This was most vividly illustrated when they intervened at length to conclude a deal allowing the devolution of policing and justice powers in 2010 – the key issue which brought down the old Stormont in 1972.

When Haass was last in Northern Ireland 10 years ago, one of his foremost challenges was to encourage Sinn Féin participation in the new policing dispensation. That eventually happened in 2007, long after Haass had left the US state department for the council on foreign relations, a non-party think-tank which he leads. As someone with experience in the Middle East and southern Asia, Haass must know that peace-building and deal-making can be a messy and complicated business.

The 1998 Belfast Agreement was indeed a breakthrough – but it was not, and was never claimed to be, a total triumph. The deal paved the way for the form of governance Northern Ireland now has, involving roles for both London and Dublin. But what that deal could not fix, it fudged.

It smoothed over the issue of paramilitary weapons decommissioning, it did not deal with policing – opting instead to leave that to the Patten Commission – and it did not deal with “the past”. Since then, these have been addressed piecemeal and often at an agonisingly slow pace. However, progress has been cumulative and Northern Ireland is transformed in a manner even the most starry-eyed would have found breath-taking 20 years ago when the ceasefires were being negotiated.

However, more remains to be done. Controversies over who can march where and for what have dogged politics since the mid-1990s. What flag flies where and when and with what official sanction is a deeply felt issue which goes to the core of unionist politics. Both issues have prompted the most serious violence and civil disorder since the IRA and loyalist ceasefires in the heady days of late 1994. Much of the smoke that hung over central Belfast during 2013 was a result of violence provoked by these two issues alone.

And the past, as controversies (and lengthy tribunals from Bloody Sunday to Smithwick) have shown, retains a grip on the present and a restraining force on future political progress – a trait not specific to Northern Ireland.

The Haass talks on these issues are now at make-or-break point. As talks chairman, Haass has done as much listening and learning as is reasonable. O’Sullivan, Haass’s assistant, has often remained in Belfast when he has returned to the US, keeping the initiative going. Between them, the parties are being pushed and coaxed towards agreement.

They have already read, debated and (in some cases) rejected the first Haass-O’Sullivan proposals submitted last week. Another was given to them on Saturday with a third sent to them yesterday afternoon. Whatever happens, the shape of a possible deal is already known.

On parades, new structures will be set up to deal with contested marches involving an appeals mechanism. On the past, there will be a range of initiatives giving primacy to the needs of relatives of those who died in the Troubles, beefing up structures for investigating historic killings and offering “limited immunity” for authentic information. An ingenious concept, used to help get rid of paramilitary guns and obtain information from former paramilitants, this could greatly help grieving relatives and survivors obtain believable accounts of what happened to them or their loved ones during the violence decades.

On flags, both Haass and O’Sullivan have their work cut out. This tends to be a zero-sum game. Either the union flag flies or it does not. Either it is accompanied by the Tricolour or some other emblem, or it does not. There is little room for nuance here and the talks team may have few options on which the parties agree.

Both the talks chairman and his assistant are not beyond using pressure on the parties. Haass used a press conference on Friday to spell out his belief that failure to agree only benefits dissident extremists.

He may well believe, as the Irish Government does, that public opinion is running ahead of the parties, especially on the unionist side, and that there is more to be gained by risking a deal than there is by stubbornly admitting failure.