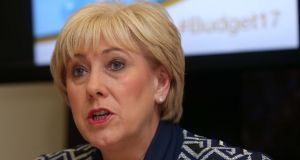 Minister for the Arts Heather Humphreys: former director of the National Museum Pat Wallace has said this is the second attempt by her to “grab” at the museum. Photograph: Laura Hutton/Collins Photo Agency

The Houses of the Oireachtas is prepared to offer the National Museum legal guarantees that it will only house the Seanad for temporary period to allow for refurbishments in Leinster House. Ceann Comhairle Seán Ó Fearghaíl this week led an Oireachtas delegation to meet museum staff concerned about the forthcoming move.

The Upper House is to be rehoused in a space in the Ceramics Room in the National Museum, next door on Dublin’s Kildare Street, while the Seanad and its ante-rooms are renovated. This has led to concern from museum staff that the move could diminish the museum and violate a building that contains artefacts such as Ardagh Chalice, the Tara Brooch and the Cross of Cong.

Former director of the National Museum Pat Wallace last month said staff were so upset about the impending arrival of the Seanad to the building that they had been “weeping”. He claimed this was the second attempt by the Minister for the Arts Heather Humphreys to “grab” at the National Museum.

His intervention led to others, such as An Taisce, expressing concerns. Mr Ó Feargaíl and an Oireachtas delegation this week met museum staff in an attempt to assuage their concerns about the move. It is understood that the Ceann Comhairle offered a “verbal, written or legal” guarantee that the Seanad would move once the Leinster House works, expected to take 18 months, were completed.

Staff also expressed concern about the neglect of the museum and other cultural institutions in recent years; Mr Ó Fearghaíl proposed the establishment of a parliamentary forum to interact with such institutions in future.

It is also understood that the Oireachtas delegation stressed the long-term benefits to the museum from the Seanad relocation, such as the installation of a lift and other renovations to existing rooms.