Growing fear of tensions during Twelfth of July parades 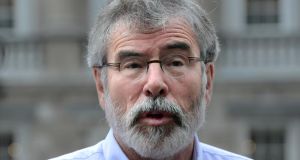 Concern is growing in the North that the potential for serious community tensions during next Saturday’s Twelfth of July parades has increased significantly as a result of the bitter political rows of recent days.

Relations between the leaders of the Stormont Executive deteriorated sharply after the Parades Commission banned a controversial Orange march in the Ardoyne area of Belfast on the evening of July 12th. The banning of the same march last year led to several days of serious loyalist rioting.

Sinn Féin yesterday accused the DUP of being “led by the UVF and Orange Order” in its response to the decision not to permit Orangemen to pass a flashpoint at Ardoyne on their return home from the main Twelfth demonstration.

Deputy First Minister Martin McGuinness said Peter Robinson, the DUP leader and First Minister, was “not in a position to take decisions” because of pressure from such elements.

Sinn Féin president Gerry Adams said the British and Irish governments should intervene to stabilise the volatile political situation as the Twelfth nears. The SDLP echoed this.

Mr McGuinness accused unionist leaders of a failure of leadership and accused them of “throwing in their lot with those who would attempt to foment conflict on the streets”.

“Although there is much anger at the latest restriction on our legitimate cultural expression and traditions, I would once again reiterate the institution’s call for any protest to be lawful and peaceful.”

Unionist leaders walked out of inter-party talks at Stormont on flags, parades and the past on hearing of the Parades Commission decision on Thursday and withdrew from yesterday’s planned North-South talks at Dublin Castle.

Sinn Féin’s Gerry Kelly said this was a premeditated move, as was the preparation of a joint statement issued on Thursday by the main unionist parties and representatives of the UVF and UDA. The statement warned of a “graduated response” of opposition to the banning of the Ardoyne parade.

Unionist figures, pressed in a series of broadcast interviews yesterday about what a “graduated response” meant, declined to be specific.

Mr Nesbitt said it that would “become more obvious as the days and weeks roll out”. “All I’m prepared to say at the moment is that ‘graduated’ is not necessarily the same as ‘escalated’, and everything we do will be lawful and peaceful.”