Group not open to all Independent Senators, Craughwell says 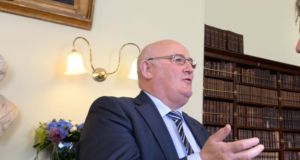 Senator Gerard Craughwell, who became an Independent member of the Seanad in its byelection last year, has twice applied to a group of five Independent Senators but has twice been rebuffed. Photograph: Dara Mac Donaill/The Irish Times

It seems the first ever group for Independent Senators is not open to all non-aligned Senators - but only those who meet its approval.

Gerard Craughwell, who became an Independent member of the House in its byelection last year, has twice applied to the group of five Independents but has twice been rebuffed.

In contrast, following her decision to leave Fianna Fáil, Averill Power was accepted into the group within days of her leaving the party.

Mr Craughwell has written to the Cathaoirleach of the Seanad, Paddy Burke, questioning the decision to exclude him from what is essentially a technical group.

The six Senators who form the group now comprise Ms Power and five others nominated by Taoiseach Enda Kenny, but none of whom had accepted a party whip.

Their formation as a group affords them certain speaking rights in the Upper House, and other priorities.

Mr Craughwell said on Wednesday he has been given no explanation as to why he had been excluded. He said he had shown a capacity for hard work and fairness.

“It is demeaning that I should be rejected from a grouping without even the courtesy of a fair explanation,” he said.

Saying he is angry about his exclusion, he pointed to the technical group in the Dáil where Independents of various backgrounds were able to work together.

“My speaking time is restricted and there is no reason for it except to keep the club for certain insiders - if you are not one of those or don’t play the system, there is an effort to keep you out. That’s the only way this can be interpreted.”

There is another Independent technical group in the Upper House, also comprising five members. But Mr Craughwell has said he cannot join that group as it is made up of Senators elected through the universities.

The whip of the group, Ms van Turnhout, said she had no comment to make on the exclusion of Mr Craughwell, or on whether the group was being elitist, as Mr Craughwell had intimated.

It is understood all five members of the group must agree to admit a member, and not all agreed Mr Craughwell should be admitted.

In contrast, all five agreed Ms Power could be admitted to the group.