‘It’s the fourth most complained about council, with the fifth highest council tax’ 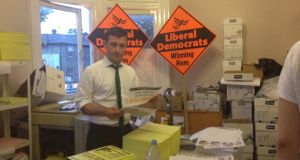 A young man wore a rosette on his lapel in the 1997 general election when he canvassed for his grandfather, Paddy Harte, in Donegal North-East in the 1997 election – a fight that resulted in the end of Harte’s near 40-year career in the Dáil.

The young man, also Patrick Harte, is now 32. Today, a rosette from that campaign, declaring “Vote Paddy Harte”, is to be found in Haringey, north London, where Harte jnr is bidding to win a seat on the council for the Liberal Democrats.

A London-based barrister, Letterkenny-born Harte told The Irish Times: “I was speaking to my grandfather on Sunday. I told him that there was another Paddy Harte on the ballot paper. He was delighted.”

The campaign team is filled with family. His father and sister Ellen went knocking on doors for him on Tuesday night; his brother Neil rang constituents from his home in London, while friends are helping too.

Not for faint-hearted “David Sharkey is one of them. His father, and I am sure he won’t mind me saying this, was late for his own wedding because he was driving my grandfather to a campaign meeting,” says Harte.

Being a Liberal Democrat in 2014 is not for the faint-hearted. Despite the national polls that have been unremittingly bad for the party, this time they believe they have a chance of ending Labour’s dominance in Haringey.

“It’s the fourth most complained about council in London, with the fifth highest council tax. The Baby P scandal [where health authorities failed to rescue a baby from parents who starved and beat him to death] was here,” says Harte.

However, nearly half of the outgoing Lib Dem councillors are not standing, while the party has been criticised for putting forward candidates who do not live in the borough.

Voters’ concerns are strictly local: the state of the roads and education chief among them.

Traditionally, the Irish vote in Britain has been staunchly Labour, though the Lib Dems have lately made efforts to develop better ties. In the local elections, they are running half-a- dozen Irish-born candidates.

First- and second-generation Irish are commonly found in Haringey: “My accent seems to be almost universally welcomed so we can assume that it does me no harm,” he says.

Despite the difficulties facing the Liberal Democrats and Nick Clegg, Harte remains upbeat: “The challenges of coalition government are not lost on me who grew up on them ... However, we saw what happened to the Progressive Democrats and the Greens in Ireland. There is no way that that is happening to the Liberal Democrats. They are strong locally; they are not a flash in the pan.”