Bill to prohibit practice, with loss of 100 jobs, has support of all parties except Fine Gael 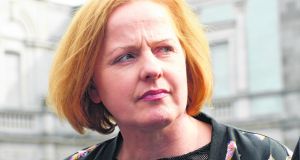 Ruth Coppinger TD has urged the Government to follow the example of Italian fashion house Prada which has joined every other major international designer brand to go fur-free. Photograph: Cyril Byrne

The Government is being pressed to support legislation to ban fur farming as all major international fashion houses no longer use fur and half the EU has banned such farms.

Solidarity TD Ruth Coppinger said she had support from all political parties except Fine Gael for her Prohibition of Fur Farming Bill.

She urged the Government to follow the example of Italian fashion house Prada which, she said, last week joined every other major international designer brand to go fur-free.

Fourteen of the EU’s current 28 members have banned or are in the process of banning such operations.

However, more than 100 people are employed by three fur farms in Donegal, Kerry and Offaly.

Údarás na Gaeltachta, the authority tasked with the economic, social and cultural development of Gaeltacht, came in for significant criticism from numerous animal-rights organisations after it emerged in April that it had given more than €200,000 since 2009 to two fur farms in Donegal, one of which has now closed down.

The authority pointed out that the farms adhered to the licensing rules and rigorous controls set out by the Department of Agriculture and had provided considerable employment in Donegal over the previous 21 years.

Ms Coppinger said that as “solitary, wild and semi-aquatic creatures, packing mink into metal cages in groups is alien and unnatural”.

She said on that basis Veterinary Ireland, the organisation representing veterinary surgeons, “asserts that it is impossible to regulate the fur trade and somehow make it kinder because it is not farming at all”.

Its animal-welfare committee had originally considered a number of recommendations to improve the health and welfare of farmed mink.

But it concluded that the welfare programme implemented by fur farmers “cannot prevent the welfare problems regularly encountered on fur farms, such as stereotypes [repetitive movement] and serious injuries”.

Fur Europe, a Brussels-based organisation representing fur farming has rejected the call for a ban and claimed Veterinary Ireland’s policy was based on a single report.

In February, Minister for Agriculture Michael Creed also rejected the Veterinary Ireland recommendation. He said he could not close down a “legitimate, highly regulated and inspected industry”, which he estimated employs more than 100 people in the State.

Mr Creed said he had “no imprimatur by virtue of the programme for government or a mandate from the people” to ban the industry.

Ms Coppinger raised the issue in the Dáil last week and said the Government could ban such farming by signing a ministerial order rather than introducing legislation. It had made a similar order in 2017 when it banned the use of wild animals in circuses, she said.

Minister for the Environment Richard Bruton told her the Government would give the Bill serious consideration. “An issue such as this would have to be considered by the Cabinet so that we could take a collective view,” he said.