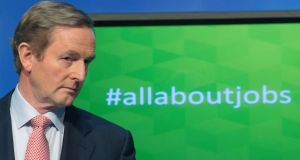 Taoiseach Enda Kenny said the State ‘must continue restraint and discipline in respect of public finances’.

Taoiseach Enda Kenny today indicated the Government is set to continue with its policy of economic austerity this year, saying the State “must continue restraint and discipline in respect of public finances”.

Mr Kenny was speaking during an interview on RTÉ’s News at One during which he outlined the Government’s agenda for the coming year.

“The medium-term economic strategy sets specific targets such as to have our deficit below 3 per cent by 2016, to have it eliminated by 2018, and to have full employment by 2020 – in other words to restore the 300,000 jobs that have been lost in this period,” he said. “We’ve got to create 50,000 net new jobs this year and next year – that’s our objective.”

He said the Government’s strategy is based on three pillars.

“One is the banks. They are not functioning the way we want them to. They’re not in a position yet to give real impetus to the domestic economy. That’s a real issue. We’ve set targets for them: mortgages, access to credit, small and medium enterprises.

“You are going to see continuous, relentless, engagement with the banks in terms of what their function should be and where we need them to be contributing to the domestic economy.

“Secondly, continue restraint and discipline in respect of our public finances. But fundamentally here, this is about jobs.”

He said there would be a special emphasis on the construction sector. “Before the end of February, we’re calling all of the minister’s back in and focusing on the domestic economy for construction, for housing, for access to credit, for building.

“There are 90,000 people on the live register who were involved in the construction industry previously. We have to get those people back into productive employment so that confidence can spread throughout the country.”

Mr Kenny also paid tribute to the “sacrifices” made by the State’s citizens and said the upgrading of Ireland’s credit rating to investment status last month means international investors can now look at Ireland in “a different way”.

“Remember that the sacrifices people have made here contributed in the main to Ireland’s exiting the bailout programme, but also, as a consequence, that the rating agencies increased our status on our credit from junk to investment status.

“That means that investment authorities internationally can now look at Ireland in a different way to previously because you couldn’t invest when you didn’t have full rating from all the agencies. There are people coming over from Asia this month to look at Ireland and that has an impact on the national debt as well.”

Separately, Mr Kenny indicated there would be no way back into the party for exiled TDs who have been expelled for voting against the Government.

“The number of deputies who left during the Protection of Life during Pregnancy Bill supported the Government in all of our other economic and political reforms. They made this choice themselves.”

He also rejected calls for the Government to legislate for gay marriage and said it was a matter for a constitutional referendum which he would seek to hold this year.

“We believe it’s important the people have a rational, common sense, calm, considered and compassionate debate about this and I hope that happens. I didn’t consider legislating for this. It is a question for a referendum and it will be held next year.”