Government gives itself an A1, but not all would agree

The Coalition did well on the economy, but was not so strong on health and housing 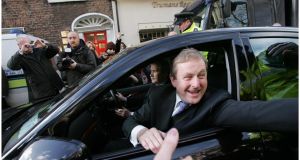 New Taoiseach Enda Kenny is congratulated by colleagues as he leaves Leinster House to drive to Áras an Uachtaráin to meet with President Mary McAleese. Photograph: Bryan O’Brien/The Irish Times

The Coalition last month assessed how well it had done in implementing its programme for government. Modest as always, it awarded itself 93 per cent, an A1 no less.

The programme contained hundreds of promises. Some of the Government’s successes were big, some were small – but the failures were also big and small.

It was not a seamless document either, having to be renegotiated into a “statement of government priorities” after a 2014 ministerial reshuffle.

The big wins were mostly on the economy, the recapitalisation of banking, the setting up of two pillar banks, bankruptcy law reform and the jobs “fund”.

A huge achievement was the lengthening of the term for repayment of the sums due on the Anglo Irish Bank promissory notes. There is ongoing debate on what this was actually worth, but politically it was a big win.

One of the earliest failures though was an effort to reduce interest rates on the troika bailout loan to Ireland of €67.5 billion. German chancellor Angela Merkel rebuffed that, and the Government also failed in all its attempts to “burn” bondholders. Minister for Finance Michael Noonan got nowhere with Jean-Claude Trichet and the ECB, no matter how he dressed it up. There were other early failures. Plans were abandoned for VAT exemption for companies that exported more than 90 per cent of output. The target of ending “upward-only” commercial property rent reviews also came a cropper, as did a single business tax for micro-enterprises. The Government promised a “pay-as-you-save” scheme for home insulation that would cover one million homes by 2020. The funding never materialised. With the climate change imperative since the Paris Agreement 2015, there is no longer any excuse for lagging behind. That’s a big F for failure.

A promise to ensure wealthy tax exiles made a fair contribution to the exchequer bellyflopped. Only 10 paid the €200,000 domicile levy.

A stand-out achievement was the same-sex marriage referendum, which was pushed hard by former tánaiste and Labour Party leader Eamon Gilmore. There was a Damascene conversion within Fine Gael.

Enda Kenny once tripped over a flowerpot when trying to avoid questions on the proposal. Within two years he was tripping over himself with his enthusiasm for the Yes campaign, including a visit to Dublin’s gay Pantibar.

Dáil reform was a disappointment. The Coalition failed to reach its goal of a 50 per cent increase in Dáil sitting days. The number rose from 101 in 2010 to 123 a year during its term.

The guillotining of debates remained (although fewer in number lately) and other goals such as a committee week, topical issues and the Friday Dáil sitting were either not achieved or were underachievers.

The so-called quango cull sounded good, but cutting the number of State bodies was problematic from day one and did not really happen. Indeed, in recent years, almost as many quangos were created as cut. Brendan Howlin was successful in introducing a wider Freedom of Information Act, a lobbyists’ register, an independent policing authority and whistleblowers legislation.

However, when the referendum on parliamentary inquiries was defeated, hopes of a robust banking inquiry died. What eventually transpired was too late, too weak and too cumbersome. It managed to get its report out in the nick of time, but it was met with near blanket indifference.

Government successes should be acknowledged. There was no surprise that the corporate tax rate was retained at 12.5 per cent. Property tax and water charges were part of the programme for government and both have come in.

The Coalition promised to review the universal social charge. In its first budget, it took 300,000 lower earners out of its net. Since then the abolition of USC in its entirety seems a core policy of most of the mainstream parties.

Then minister for the environment Phil Hogan made good on a promise that political funding for political parties would be tied to a percentage of women election candidates and introduced a 30 per cent quota, which provided headaches for Fine Gael and Fianna Fáil.

A Fiscal Advisory Council was established , but most of its advice was ignored.

Another big reform was to open up the budget process to the full glare of public scrutiny. “Paddy” wanted to know after all, did he not? Did it happen? Not a chance.

However, Howlin did introduce a comprehensive spending review, with expenditure ceilings for each department.

It is a good idea and knowing what your limits are for the next three years contributes to long- term planning. The only problem is there has been no real sanction for default.

An item included in the programme for government on Labour Party insistence was a commitment to establish an expert group to make recommendations following the European Court of Human Rights (ECHR) judgment in the ABC case taken by three women who travelled abroad for abortion services.

There was no urgency on the Fine Gael side to tackle this until the death of Savita Halappanavar. Eventually, legislation was introduced to give effect to the Supreme Court ruling in the X case and the ECHR in the ABC case, but Fine Gael lost seven TDs and Senators from its parliamentary party over it.

Another Labour Party issue was the promise to maintain social welfare rates. Basic rates were maintained, although there were sharp cuts in jobseeker’s allowance over two budgets. There were other severe cuts in non-core welfare payments.

The biggest failures have been in health and housing. Universal health insurance is unlikely to happen. The big Labour project to provide universal primary GP care is only partly achieved and the jury is still out on it. Plans to cut waiting lists have been a damaging failure. The new national children’s hospital is being built, but years behind deadline.

The specific goal to end long- term homelessness by this year is aeons away.

Housing continues to be a headache for the Government.

Specific promises on homelessness were also included in the statement of priorities in 2014. Far more social housing units were built last year, but this was from a low base. It is still a long way short of the 35,000 units the Government promised under a six-year €3.8 billion plan.

Few inroads have been made in making 2,700 vacant housing units fit for use. The difficulty for the Government is that housing is a long- term proposition. To fix the current crisis will take years and involve tackling some very complicated questions, including the rising population and the unrelenting increase of demand in Dublin.

The Nama commitment to build 25,000 units, in addition to a two-year rent review (a win for Alan Kelly), might make a difference, but it is far too early to make any evaluation.

Another full term has passed with no judicial council, which has been on the agendas of governments for two decades.

So did the Government deserve 93 per cent? Not quite.