Government agrees on seven referendums in 2018 and 2019 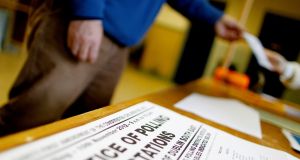 The referendum on the Eighth Amendment, which places the life of the unborn on an equal footing to that of the mother, will be held in isolation next May or June. Taoiseach Leo Varadkar said this was a particularly sensitive issue that should be a “standalone” referendum. File photograph: Julien Behal/PA Wire

The Government has agreed to hold seven referendums over the next two years but has been criticised for failing to propose votes on enshrining water services in public ownership or on economic and social rights in the Constitution.

Taoiseach Leo Varadkar sought approval on indicative timelines for a number of referendums over the course of 2018 and 2019 at Tuesday’s Cabinet meeting.

The referendum on the Eighth Amendment, which places the life of the unborn on an equal footing to that of the mother, will be held in isolation next May or June.

Mr Varadkar said this was a particularly sensitive issue that should be a “standalone” referendum.

The Oireachtas committee examining the issue is due to report by the end of December and its proposals will be legislated for in the Dáil and the Seanad.

The Taoiseach said May or June was the earliest opportunity for the referendum, and stressed he would not like to see it delayed beyond then.

Votes on removing blasphemy as an offence, altering the role of women in the home and directly electing mayors will be held alongside a presidential election (should one take place) in October 2018.

Referendums on divorce, reducing the voting age and extending voting rights will be held in 2019 to coincide with the local and European elections.

The Government is yet to make any decision on whether a referendum will be required to give Oireachtas committees more power, but it has provisionally scheduled such a ballot for late next year.

Mr Varadkar said he was advised against holding a series of votes on the one day as it may cause confusion for some people.

“Any amendment to our Constitution requires careful consideration by the people. They should be given ample time to consider the issues and to take part in well-informed public debate,” he said.

“Setting a timetable for the referendums to be held over the next two years will allow all involved in campaigning on the issues to plan ahead and to facilitate that public debate.”

Labour TD Jan O’Sullivan said this was a missed opportunity, insisting the matter should have been progressed.

“A key recommendation of the Joint Committee on the Future Funding of Water was that a referendum would be held to ensure our water infrastructure remains in public ownership,” the former minister said.

“It is bizarre that while considering the possible dates for holding votes on future constitutional amendments, that no consideration was given to holding a referendum on water infrastructure...There is cross-party consensus on this issue, and a draft wording has also been discussed at the committee.”

The decision to omit a potential vote on enshrining economic, social and cultural rights in the Constitution was also criticised by Social Democrat TD Róisín Shortall. This was proposed by the Constitutional Convention in 2014.