State papers: Charles Haughey had to intervene in row after Duke of Leinster requested 16th-century stone table be given to county council 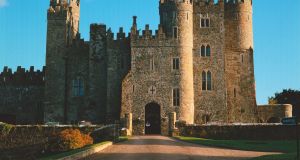 Kilkea Castle in Co Kildare was home to the Duke of Leinster.

It started off as a kind gesture when the Duke of Leinster offered an ancient stone table to the RDS during the sale of Kilkea Castle in 1961, but State papers show it caused protests, an intervention by the taoiseach, the seizure of the table by gardaí and several court actions.

Nearly 60 years later, the table has still not found its permanent home.

The large cut stone table was made for Gearóid Óg Fitzgerald, father of Silken Thomas, in 1533, and became known as the Silken Thomas Table. It was used to collect rent and its sides were raised to stop the coins from rolling off the table. The table originated in Maynooth Castle, moved to Carton House, and eventually Kilkea Castle in Co Kildare.

The Duke of Leinster sold the castle to the Land Commission in 1961, excluding the table from the sale, and moved to Britain.

The RDS wrote a letter of thanks to the duke, saying the table was a “fine specimen of the Stonecutters’ Art”. However, it did not collect the table, expressing concern it did not have a suitable site which would give it sufficient prominence while also protecting it “from the possibility of further damage by show crowds, either wanton or accidental”.

An RDS official also expressed the worry that “the smoke-laden atmosphere” at Ballsbridge might tend to disintegrate the stone carvings and said the society felt it was safer to leave the table at the castle.

Kilkea Castle changed hands a number of times in the following years and became a hotel. In 1980, the RDS accepted the Duke of Leinster’s request to pass ownership of the table to Kildare County Council. However, a dispute arose with the castle owner, Shanley Hotels, over ownership of the table. When the castle went on sale again in 1987, An Taisce member and historian Eamon Kane sought taoiseach Charlie Haughey’s help in ensuring the table was not taken out of the county. He was concerned it was deteriorating from exposure to the weather and asked that it be declared a national monument before the auction was held.

Haughey said it would be best to await the outcome of the auction before taking action. Within weeks, it emerged the table was being moved to Dublin and matters took a hasty turn. Local people and conservationists blocked the road to prevent the table from being removed. Gardaí were called. They seized the table and took it to Carlow Garda station for safekeeping. National Museum staff examined it and found it had suffered some damage in the attempted move.

Haughey wrote to Kane to say he was “extremely disturbed” to hear of the damage to the table and he said the State was considering the best action to take. Patrick Tattan, director of Shanley Hotels, was prosecuted on two charges under the National Monuments (Amendment) Act 1987. He pleaded guilty to the lesser of two charges of altering an archaeological object without a licence and was fined £500 the following June.

Legal wrangling continued over the ownership of the table and Tattan later wrote to Haughey, asking for a meeting to come to a compromise on two issues – the table, and a second controversy he was involved in – the felling of oak trees on the Coolattin estate in Co Wicklow. Haughey had spoken out against the tree felling and Tattan took issue with the fact that it appeared he was “supporting agitators who were trespassing on the estate”. He also said if press reports were to be believed, Haughey had also “backed the agitators at Kilkea Castle”. He said he was unhappy with a comment Haughey allegedly made about him and hoped he would meet him and deny the statement.

A Department of the Taoiseach official recommended Haughey should not respond to the letter, beyond acknowledging it, as it could embroil him in further controversy.

The Ceann Comhairle and Kildare TD Seán O’Fearghail has been involved in a plan to put the table on display in Athy Heritage Museum.