‘Get out there and turn the tide,’ UUP election candidates told 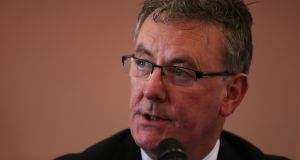 Ulster Unionist Party (UUP) leader Mike Nesbitt says his party is fighting to win as many seats as possible at the Assembly elections on May.

However, he said the party would form the official opposition if he does not sense from other Stormont parties a collective will to deliver a progressive Programme for Government.

At the UUP Spring conference in Armagh on Saturday, Mr Nesbitt said “we may not be the biggest unionist party at the moment, but we are the party with the best ideas - and the most inclusive ideas.”

The UUP leader spoke of his party being the “only one of big five with momentum” and of it having a “new found credibility with the public”.

He is confident of building on success at the council elections in Northern Ireland two years ago and the Westminster election last year, where the party made a return to the green benches of the House of Commons with Danny Kinahan and Tom Elliott gaining seats in South Antrim and Fermanagh South Tyrone.

The latter followed a unionist pact with the DUP which saw Sinn Féin’s Michelle Gildernew unseated.

“Get out there and turn the tide,” he said.

Mr Nesbitt was critical of First Minister Arlene Foster’s comments last week when she urged people to vote DUP in the Assembly elections on May 5th to ensure Sinn Féin’s Martin McGuinness did not become First Minister.

He said the DUP was ‘welcome to Project Fear and Project Scaremonger.’

“I have no interest in encouraging people to vote out of fear. I want us to promote Project Hope,” he added.

Mr Nesbitt believes the DUP and Sinn Féin have broken promises and failed the people of Northern Ireland.

He claimed “devolution is simply nowhere near as good as it gets” and reiterated that the UUP will not automatically rejoin the Northern Ireland Executive after May 5th.

“We will seek a strong mandate to enter the negotiations on the next Programme for Government that will follow the elections and precede the formation of the next Executive,” he said.

But Mr Nesbitt warned that if he did not sense a collective will to deliver a progressive Programme for Government, “capable of improving the lives of people”, the UUP will form the official opposition.

The UUP withdrew its only minister from the Executive last August after the PSNI said Provisional IRA members were involved in the murder of Belfast republican Kevin McGuigan.