Gerry Adams to release ‘My Little Book of Tweets’ 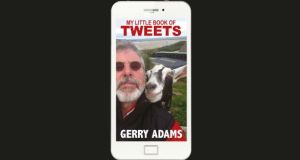 Sinn Féin leader Gerry Adams is to release a book of his best tweets this month, according to the party’s website.

The book promises to show “the lighter side of his personality,” according to the Sinn Féin bookshop website, which describes his tweets as “bizarre, weird and as part of a clever strategy”.

A sprig of mistletoe in the lift in Leinster House. Just saying. See u there @ 9 in morning. pic.twitter.com/LVb9H2xaC9

No beans in a fry. Especially an Ulster fry. Unless it's a British occupied 6 counties fry. Oiche mhaith xoxozzzzzzzz

I never knew Pierce Brosnan was so good looking.

This is me without the beard. pic.twitter.com/jyry0xSvDm

The featured tweets will include “selfies...rubber ducks and teddy bears”, which tend to make regular appearances on the Twitter feed of Mr Adams.

Those familiar with his social media musings will recognise Tom and Ted, his dog and teddy bear, as well as his fondness for rubber ducks.

He also tends to abbreviate Irish phrases such as “go raibh maith agat” to more character-friendly alternatives like “GRMA”.

The Sinn Féin bookshop website, where you can pre-order ‘My Little Book of Tweets’, also sells other trinkets such as Bobby Sands keyrings and t-shirts with a copy of the 1916 Proclamation printed on it.