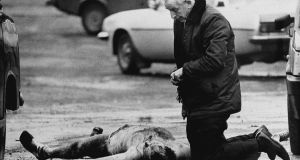 Fr Alec Reid praying over the body of one of the murdered soldiers. Photograph: Trevor McBride

At the chapel in the Redemptorist house on Orwell Road in Dublin on Monday morning the provincial superior of the order, Michael Kelleher, in a magnificently crafted eulogy to his fellow Redemptorist Alec Reid, spoke of that well-known photograph of Fr Reid kneeling and praying over the naked dead bodies of two British soldiers, Derek Wood and David Howes, in Belfast on March 19th, 1988. He reminded the congregation of there being blood on the distraught face of Fr Reid and explained: “He had been giving the soldier the kiss of life.”

Anybody who remembers the television pictures of that incident will recall that these soldiers had driven into the cortege of the funeral of an IRA member, who had been one of three people killed by a loyalist gunman, Michael Stone, some days previously, during other IRA funerals in Milltown cemetery. They will remember how the crowd, in a frenzy, surrounded the car in which the soldiers were driving and how they were dragged from there and murdered. All within a few minutes.

Solace
By no means was this the worst atrocity of the Northern Ireland Troubles but for many it was the most shocking, because the lead-up to the murders had been so vividly captured on television. Fr Reid was the only person who seemed to have tried to give solace to these fellow human beings, amid an understandable frenzy, followed by cold-blooded murderous calculation.

Many will also recall how Gerry Adams continued his walk behind the coffin of the IRA man, Kevin Brady, unperturbed, it seemed, by the horror taking place nearby, a horror he must have anticipated, once the soldiers had been apprehended. He, perhaps alone, could have intervened to spare the soldiers’ lives.

I recall being shocked by Adams’s insouciance in the face of that atrocity and how vividly it contrasted with the instinctive compassionate response of Fr Reid.

But maybe my shock was misplaced. By March 1988 Adams, encouraged by and facilitated by Fr Reid, had embarked on a peace project, to end republican violence forever. And, largely, he achieved that, first with an IRA ceasefire six years later and the Belfast Agreement in 1998.

Of all the people engaged in that peace project, by far the most significant were Adams and, perhaps, Martin McGuinness. Others too played a significant part. Fr Reid himself, so crucially, and John Hume. Also Charles Haughey, Albert Reynolds, Bertie Ahern, John Major, Tony Blair, Martin Mansergh and many others.

But Adams risked his life in a way none of the others did, aside from McGuinness.

Crucial
Along the way towards that peace and before the peace initiative commenced, as a leading commander and strategist in the IRA, he was involved in many terrible atrocities. But almost certainly those atrocities would have happened had he not been in the IRA. Almost certainly the peace agreement would not have happened had he not been there – certainly not as early as the ceasefire in 1994 and the peace agreement in 1998. No other person was as crucial to the peace, which came when it did, than the person who brought such grief and murderous destruction along the way.

He certainly has compromised himself further with the claim he was never in the IRA. His evidence in cross-examination at the trial of his brother Liam, on the charge of sexually abusing his (Liam’s) daughter is not at all impressive either, but who among us would not have been compromised by revelations of sexual abuse within our own close family, especially since it has emerged the father of Gerry and Liam Adams was also a sex abuser?

Neither is his performance as a political party leader in southern politics impressive – he seems awkward and feigned in the role.

But all this does not detract from the fact that were it not for him the Northern Ireland conflict would have persisted intensively long after 1994 and it is hard to believe anybody else could have persuaded the vast part of the republican movement that the humiliating surrender of everything it stood for was a victory.

As he walked behind the coffin of Kevin Brady, apparently indifferent to the horror being perpetrated nearby, perhaps he believed his insouciance to that and to the other awfulness that had happened and probably was to come was a necessary corollary to the long peace strategy in which he was engaged with the priest nearby, who had blood on his imploring face.