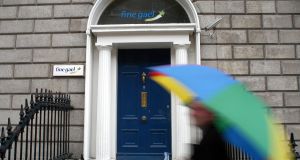 Fine Gael wants to avoid a repeat of a row before the last election, which saw a former minister of State take the party to court in a dispute over a selection convention. Photograph: Marc O’Sullivan

Fine Gael is taking advice from the GAA on how to settle disputes as it attempts to put structures in place to avoid internal rows ending in expensive court proceedings.

The GAA’s Disputes Resolution Authority (DRA) regularly adjudicates on on-pitch disputes and Fine Gael is looking to mirror this approach in politics.

It wants to avoid a repeat of a bitter row before the last election, which saw former minister of State John Perry take the party to court in a dispute over a selection convention.

Mr Perry took the High Court challenge over the convention at which he failed to secure a place on the Sligo-Leitrim constituency ticket.

A deal was eventually reached which saw Mr Perry added to the ticket, although he failed to hold his Dáil seat.

It is understood the case cost Fine Gael hundreds of thousands of euro and, although party sources say contingencies are made for such costs, the new system will be aimed at avoiding a repeat of the Perry case.

It is one of a number of reform moves undertaken since Taoiseach Leo Varadkar assumed the leadership of the party.

Fine Gael sources described the GAA’s dispute-resolution mechanisms as the “gold standard” and say they are taking advice from senior figures in the sporting organisation.

“The GAA are the gold standard in terms of settling their disputes outside of court,” said a Fine Gael source. It is understood that everyone in Fine Gael would have to commit to the new dispute-resolution process, rather than taking rows to the courts.

Rory Hanniffy, the secretary of the GAA’s DRA, has said its “basic job is to keep the GAA out of the High Court”. It was set up in response to injunctions that were taken in the early 2000s.

One of the most high profile cases before the DRA in recent years was a hearing before the 2015 All-Ireland senior football semi-final replay between Dublin and Mayo, when a suspension on Dublin’s Diarmaid Connolly was lifted hours before throw-in.