Funeral takes place in Co Down of father of former president 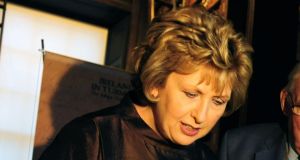 Senior State and church figures joined hundreds of mourners in Co Down yesterday for the funeral of Patrick (Paddy) Leneghan, father of former president Mary McAleese.

Mr Leneghan (88), originally from Croghan, Co Roscommon, had been ill for some time. He is survived by his widow, Claire, who was unable to attend due to illness.

The mourners were led by Mrs McAleese and her family. The former president is the eldest of a family of nine and includes sisters Norah, Catherine (Kate) and Claire, and brothers Damien, John, Patrick, Phelim and Clement.