Fresh Garda controversy is ‘not a big issue’, says Coveney

Department says Fitzgerald ‘knew of a clash’ in 2015, one year earlier than Varadkar said 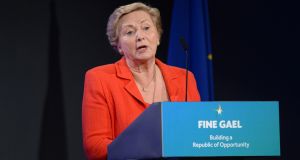 Frances Fitzgerald was minister for justice until June 2017. File photograph: The Irish Times

Minister for Foreign Affairs Simon Coveney has moved to defend the Government and Tánaiste Frances Fitzgerald as a new controversy surrounding the Garda emerged on Tuesday.

Mr Coveney dismissed as “not a big issue” a claim by Labour’s Alan Kelly that the Taoiseach gave incorrect information on the level of knowledge of then minister for justice Ms Fitzgerald had in relation to a Garda strategy to discredit Garda whistleblower Sgt Maurice McCabe.

Confusion has arisen over when Ms Fitzgerald, who is now Minister for Business, Enterprise and Innovation, first knew of the strategy to attack the credibility of Sgt McCabe, who exposed widespread Garda malpactice and the quashing of penalty points by some members of the force.

It emerged last year that the legal team appointed by then Garda Commissioner Nóirín O’Sullivan was instructed to question Sgt McCabe’s motivation and credibility at the O’Higgins Commission, which was set up in February 2015 to examine allegations of Garda malpractice. The strategy pursued against Sgt McCabe is being examined by the disclosures tribunal, chaired by Mr Justice Peter Charleton.

Mr Varadkar subsequently told the Dáil Frances Fitzgerald, who was minister for justice at the time, only became aware of the strategy when it became public in 2016. However, on Monday this information was contradicted in a statement by the Department of Justice which said Ms Fitzgerald and the department knew of a “clash between the Garda and legal teams” in May 2015 but not the detail.

Several attempts to clarify the situation further with the department were unsuccessful on Monday night.

Mr Kelly last week questioned the contact between Ms O’Sullivan and the Department of Justice at the time the legal strategy was being implemented in May 2015.

On Tuesday Mr Kelly said Government was in a precarious position because of the confusion over when she first knew details of the legal strategy to attack the credibility and motives of Sgt McCabe.

“This is a very serious situation. The Taoiseach gave me incorrect information on this question in the Dáil,” he told RTÉ’s Morning Ireland. He described the correction as “seismic” and asked how could the Taoiseach go on the Dáil record and be a “full year out of date?”

On the same programme Mr Coveney said it had not been the Taoiseach’s intention to give incorrect information.

“Alan Kelly is doing his job as a member of the Opposition. He will get his answers. It is not a big issue.”

However, the revelations place significant pressure on Mr Varadkar to correct the record of the Dáil and for Ms Fitzgerald to outline the depth of her knowledge.

Neither a spokesman for the Tánaiste or the Taoiseach was available for comment last night.

During the deliberations of the O’Higgins Commission, the legal team appointed by the former commissioner confirmed their orders were to undermine Sgt McCabe’s credibility. However, this information only became public in late 2016. The Government has insisted it had no prior knowledge of the strategy adopted by An Garda Síochána.

However, Mr Kelly has questioned the level of contact between Ms O’Sullivan and the Secretary General of the Department of Justice, Noel Watters.

Addressing these issues last week, Mr Varadkar said: “I spoke to the Tánaiste who told me that she had no hand, act or part in this decision and that she was not aware of it until after the fact, around the time it entered the public domain.

“The Department of Justice and Equality has told me that it was not made aware of it until after the fact.”

Fianna Fáil spokesman on justice Jim O’Callaghan said he would not be rushing to call for Ms Fitzgerald’s resignation. However he said clarification was necessary from the Taoiseach and Tanaiste about the circumstances involved.

Mr O’Callaghan said: “If it is the case the Tánaiste and State were aware of this strategy in May 2015, it would be a serious issue. If you look back at 2014 we note the Tánaiste told the Dáil on the May 15, 2014 that Sgt McCabe had endured very serious experiences and that the highest level of protection would be given to whistleblowers.

“It seems State is speaking out of both sides of its mouth.”