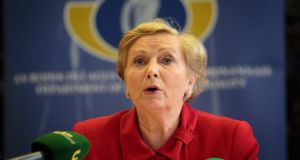 The Garda’s assessment of the PIRA in the Republic was requested by Minister for Justice Frances Fitzgerald in August after the PSNI suggested the PIRA had been involved in the murder of former member Kevin McGuigan, shot dead in Belfast, earlier in the month. Photograph: Gareth Chaney Collins

Some former Provisional IRA members are now engaged in organised crime in the Republic for personal gain, a new Garda report has concluded.

The assessment by the force also revealed €28 million has been taken by the Criminal Assets Bureau from 50 people “who have had connections or associations to PIRA on the past”.

Overall, the Garda assessment finds PIRA has not been recruiting in the Republic since it committed to the peace process in the 1990s and that it has “withered” year on year, to a much greater extent than in the North.

However, there remained serious “legacy issues”, of which defections to still-active dissident groups was one and involvement in organised crime and violence another.

“(There) is clear evidence that a significant number of persons who have been associated with PIRA remain criminally active, particularly in organised crime, and continue to associate together,” the PIRA review for Government says.

“They make full use of their “legacy” reputations and in some cases their former terrorist tactics.

“No evidence has emerged in the course of the review which has been undertaken that this activity is directed by leadership of the organisation or that it is other than for personal gain.”

The Garda’s assessment of the PIRA in the Republic was requested by Minister for Justice Frances Fitzgerald in August after the PSNI suggested the PIRA had been involved in the murder of former member Kevin McGuigan, shot dead in Belfast, earlier in the month.

In her correspondence to the Government accompanying the assessment of PIRA, Garda Commissioner Nóirín O’Sullivan said it had never been the force’s view that “PIRA had disbanded and accordingly ceased to exist”.

Instead, any assessment of the PIRA’s current status would always be “inevitably complex”, especially since some of those previously associated with it were now part of “a wider movement which includes a political party”.

Defections of former members to dissident groups and the involvement of other former members in organised crime aside, the Garda assessment gives the PIRA a clean bill of health in its transition from terrorist group to political campaign.

There was, for example, “clear intelligence and evidence” of former members “adopting exclusively political or community roles”, while other former members “have ceased to be active in the republican movement in any capacity”.

However, the “significant” number of defections from the former ranks of PIRA to dissident groupings was continuing to cause serious problems.

For example, from November 1st, 2010, to the present, 70 people have been charged with membership of an illegal organisation or related offences – including explosives and firearms crimes – with 33 having past associations with PIRA.

None of those charged was linked to the PIRA when charged. But the rivalry between both sides was an issue.

“Defections to dissident groups is often accompanied by acrimony, threats and physical attacks between former close associates, sometimes resulting in violent attacks on each other,” the Garda assessment says.