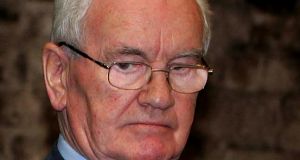 Mr Brady was first elected to the Dáil for the constituency of Dublin North Central in 1977 and continued a successful political career until his retirement 15 years later.

During that time he assumed the office of government chief whip in 1987 and was appointed minister of defence under taoiseach Charles Haughey in 1991, having previously served as a junior minister with responsibility for defence.

His rise to ministerial office occurred during Mr Haughey’s November 1991 cabinet reshuffle which also saw the elevation of Bertie Ahern to the finance portfolio.

Mr Brady was considered a solid supporter of the taoiseach at a time when he had been subjected to a leadership challenge.

His appointment to cabinet was largely considered a deserved one by political colleagues of the day.

A 1991 Irish Times article described the new minister as “very much a no nonsense kind of individual almost to the point of being brusque, he is regarded universally as being very fair and understanding in his extremely difficult post of Chief Whip”.

Following a visit to Syria in 1990, where he met with the defence minister, he reported to the family of kidnapped teacher Brian Keenan that he was alive and well. During his political career, he was also central to early debate regarding the televising of Dáil proceedings.

A former accountant, Mr Brady was born in 1936 and was educated at the Christian Brothers’ O’Connell School in Dublin and the College of Commerce in Rathmines.

He died on Tuesday at the Mater Hospital after a short illness. He is survived by his children Patricia, Tony and Ronan, their mother Mollie, and his partner Dymphna. His funeral mass on Friday will be livestreamed.