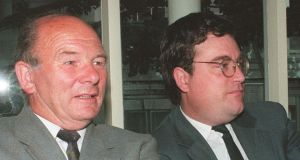 A 2002 file photograph of Denis Lyons, a former Fianna Fáil minister of state who has passed away, and Dan Boyle of the Green Party watching the Seanad election count at Leinster House. Photograph: Paddy Whelan/The Irish Times.

Mr Lyons (78) was a TD for Cork North Central from 1981 to 1992 and served as a junior minister in the departments of marine and tourism and transport.

Mr Martin said Mr Lyons was a long-standing friend and colleague whose advice and comradeship he had enjoyed since they first met when the Fianna Fáil leader was a student at University College Cork.

“Denis was a tireless representative and advocate for his community and constituency,’’ he added.

Mr Lyons, formerly a sheet metal worker, began his political career when he was elected to Cork County Council in 1972. He served on a number of the council’s sub-committees and as a trade union officer before his election to the Dáil.

When Fianna Fáil returned to power under Charles Haughey in 1987, he served briefly as a minister of state for marine before moving to the department of tourism and transport.

He returned to the backbenches in a ministerial reshuffle in February 1992 when Albert Reynolds took over as Fianna Fáil leader and taoiseach.

Mr Lyons lost his seat in the general election later that year and subsequently failed to get elected to the Seanad.

Mr Lyons is survived by his wife, Catherine, and six children.