‘For Ireland’s sake I hope you are returned’: FitzGerald’s note to Thatcher 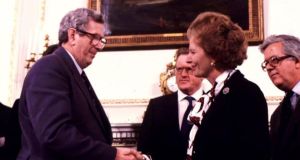 Garret FitzGerald to Margaret Thatcher: “I very much hope our paths will cross again.” Photograph: Photocall

Garret FitzGerald and Charles Haughey each sent warm personal letters to Margaret Thatcher in 1987, praising her political skill and her commitment to Ireland.

On February 22nd, a week after the general election that made his departure from office almost inevitable, FitzGerald wrote a letter to Thatcher marked personal and private. He referred to the danger that a new (Fianna Fáil) government might find it politically impossible to enact the extradition Bill. He suggested that deft diplomatic footwork on both sides and the full implementation of the Anglo-Irish Agreement by the British would assist the new Irish government in resisting political pressure against extradition.

“I regret that because of events here we shall not be able together to carry forward the great work that we in initiated, which has opened a totally new, and I would hope irreversible, phase in Anglo-Irish relations.”

The relationship which began . . . when you got soaked because of my Irish optimism about the behaviour of the Turkish sea has . . . been extraordinarily fruitful

He went on to make to points on a purely personal note. “It is not for me to comment on the domestic politics of Britain, but I think I am entitled to say that for Ireland’s sake I hope you are returned to power.

“The other is that I very much hope our paths will cross again. The relationship which began when we stepped on board that motor launch in Cesme 12 years ago – and when you got soaked because of my Irish optimism about the behaviour of the Turkish sea! – has I believe been extraordinarily fruitful for both our countries, and our encounters have always been stimulating – whether calm, as they usually were, or heated, as they sometimes became. With all good wishes for the future.”

Haughey replaced FitzGerald in the taoiseach’s office in March, and by the end of the year he had, as FitzGerald predicted, implemented the Bill.

When Thatcher won the British general election in June, and secured a fourth term, he sent her a warm note.

“Dear Margaret, Congratulations to you on your historic victory. From our position here, we see it as a well deserved tribute to your great personal qualities, particularly your skill and resolution.

“I look forward to working with you in seeking ways constantly to improve the whole range of cultural, commercial and other relationships between our two countries in the European and wider contexts and, in particular, to bring an end to divisions in this island and lasting peace and stability to Northern Ireland in the framework which has already been set.

“With all best wishes and personal regards

She responded: “Dear Mr Haughey, Thank you very much for your kind and generous message about the outcome of the general election. I share your wish to have an early talk and hope we could arrange this in the margins of the European Council in Brussels at the end of the month . . . In the meantime I send you my best wishes.”