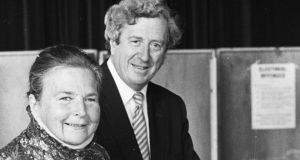 Former taoiseach Garret FitzGerald and his wife, Joan. She approved the menu for the State dinner. Photograph: Jack McManus

Guests at the 1984 State banquet in Dublin in honour of US president Ronald Reagan were treated to roast beef and turtle soup, but only the top table was served the best wine, files from the National Archives show.

Copies of the menus for the banquet in the State Apartments in Dublin Castle on June 3rd, 1984 are included in a file from the Department of the Taoiseach.

They show the top table was served Chablis Grand Cru Les Vaudésirs 1981 and Château Lynch-Bages 1978 with dinner, while other tables were served a Petit Chablis 1982 and Château Cantenac-Brown 1980.

The menu was approved by Joan FitzGerald, wife of taoiseach Garret FitzGerald.

Mr Reagan, a note recorded, was not to be served “too much butter” with his prawns.

Guests were invited from the Oireachtas, the judiciary, the public service, semi-State bodies, the churches, the business world, arts and academia, and the media.

Then editor of the Irish Independent Vincent Doyle said he could not leave “the organised chaos” of the paper on a Sunday night.

“This thrown-away chance to see Nancy, even across a crowded room, has put a severe strain on my marriage,” he told the taoiseach in a handwritten letter dated May 28th.

The Reagan visit, from June 1st to June 4th, 1984, included his address to a joint session of the Houses of the Oireachtas.

Preparations for the visit involved refurbishing the taoiseach’s office “in a style suitable for a tête-a-tête”, including the provision of “two high-backed Queen Anne type chairs”, the documents show.

Dr FitzGerald visited the National Gallery of Ireland to borrow paintings to hang on the walls. Silver was borrowed from the National Museum to decorate the banquet table.

There was some opposition to the president being conferred with an honorary degree of doctor of laws at NUI Galway and confusion about who initiated the idea.

The US president also visited his ancestral home in Ballyporeen, Co Tipperary, and Áras an Uachtaráin for a tree-planting ceremony.

Mr Reagan spent two nights in Ashford Castle, then owned by his friend John A Mulcahy, an Irish-American millionaire. He spent one night at the American ambassador’s residence in the Phoenix Park.