Fine Gael’s bright young spark yet to prove his mettle 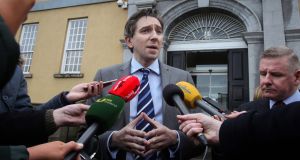 Simon Harris: the question is whether he wants to stay in Health for invevitable battles, or escape as others have in the past. Photograph: Gareth Chaney/Collins

Ask most people around Leinster House what they think of Simon Harris, and the same adjectives usually flow: clever, ambitious, hardworking and competent.

The flow is consistently halted, however, by the caveat that the Minster for Health, who turned 30 last October, has yet to prove his mettle.

The past week saw Harris apologise for a record-breaking 612 people on trolleys in hospitals across the country, the worst instalment yet of the annual post-Christmas crises.

A week of grappling with the same problem that dogged your predecessors does not prove your mettle, but it was the first time Harris, now in his second term as a TD for Wicklow, was placed in a position that brings public opprobrium. The earnest prefect had a problem on his hands.

His rise had thus far been smooth, and he was marked out as a favourite of Enda Kenny’s since the start. As the youngest deputy on his first day in the Dáil in February 2011, he echoed George Bernard Shaw’s letter to Michael Collins’s sister, Joanna, after Collins’s assassination in 1922. In a speech to nominate Kenny for his first term as taoiseach, Harris urged the House to hang out its brightest colours.

In 2014, he became junior finance minister to Michael Noonan and, upon the formation of this Government, was appointed Minister for Health.

Suggestions Kenny wanted to promote another leadership rival to Varadkar, Simon Coveney and Frances Fitzgerald – a levelling of the field that would allow Kenny to remain in office for longer – are consistently heard, too.

When the rise is so rapid, envy will soon follow and Harris is not liked by all in the parliamentary party. Some will feel a certain schadenfreude at his discomfort this week.

He is spoken of as an outside bet to succeed Kenny, but he probably knows he is still too young to step into leadership at the next time of asking. He is close to Frances Fitzgerald, who is likely to stand and would expect his support.

Harris could yet decide to run, however, to lay down a marker for the future and manoeuvre himself for a more senior role around the Cabinet table.

He certainly sees himself as a future leader and TDs detect something of wariness between Harris and Varadkar, his predecessor in the Department of Health.

This week will not change any of the above, but Harris has now felt the sharp political end of a broken health system.

Dr Michael Harty, the Clare GP and TD who chairs the Oireachtas health committee, praised Harris generally but said it was a mistake to say the situation was unpredictable.

“It was entirely predictable,” Dr Harty said. He describes Harris as “more empathetic” than his two immediate successors in the health ministry.

“He is very approachable; he is willing to take on new ideas.”

A Fianna Fáil source said Harris has “to get the officials in the department to work with him and not against him”.

“He thought that by being low-key he was being clever. [There are] so many broken promises in health so he just wants to steady the ship, but doctors, nurses and consultants are as political as anybody. And it will be a year of discontent.”

Perhaps realising that politics does not stop at the gates of Leinster House and Government Buildings, Harris sent a letter this week to Tony O’Brien, the director general of the HSE, asking him to consider removing underperforming hospital managers. There will always be failures in a broken health system and blame to be apportioned.

And the health system is unquestionably broken, but the same problems persist. Getting consultants to work longer and more unsociable hours, thus allowing more work to be done in hospitals, has been on the agenda for years.

Harris is awaiting the outcome of hearings of a Dáil committee on the future of the health system, which is due to come up with a cross-party consensus on how to proceed for the next decade, to produce a way forward.

That may be wishful thinking, since reaching political consensus on such an emotive issue will not be easy.

Even if – and it’s a big if – there is political agreement, driving through reform will take years and a huge amount of personal political capital.

It would prove Harris’s political mettle, but the adjectives that will attach to him at the end will undoubtedly be different.

The question is whether Harris wants to stay in the Department of Health for those battles, or escape as others have in the past.