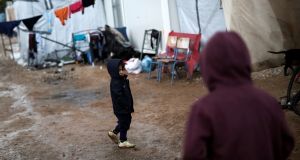 December in a refugee camp in Ritsona, Greece. The Minister for Justice has committed to ensuring that 1,100 asylum seekers arrive in the State by September. Photograph: Reuters/Alkis Konstantinidis

A total of 760 refugees had arrived in Ireland by the end of 2016 under the Government’s humanitarian programme for people fleeing conflict in Syria and other war-torn countries in the Middle East and north Africa.

The Irish Refugee Protection Programme (IRPP) was a response to the humanitarian crisis in the Mediterranean region caused by the mass exodus of people from conflict zones, especially Syria.

The Government committed to admitting 4,000 people over three years in a two-strand programme. The first strand related to displaced people who had fled the civil war in Syria and were living in camps in countries such as Turkey and Lebanon. These people had already been recognised as refugees and would come to Ireland under a resettlement programme.

The second strand covered people arriving in Greece and Italy by sea after fleeing Syria and other countries. They would be relocated to the State, where their asylum applications would be assessed.

A total of 240 have arrived under the second strand, while 520 have come to Ireland under the resettlement strand.

Minister for Justice Frances Fitzgerald and Minister for Children Katherine Zappone visited Greece in December. Ms Fitzgerald committed to ensuring that 1,100 asylum seekers will have arrived in Ireland by next September. She also committed to bringing in an additional 520 refugees during 2017.

If those targets are met, more than 2,100 people will have arrived in Ireland by the end of this year, approximately half from camps in countries bordering Syria; the other half from Greece and Italy. An estimated third of the refugees will be children 12 and younger.

Under the programme , those arriving in the State are granted international protection within about 12 weeks. Their initial accommodation is temporary, and is known as an Emergency Reception and Orientation Centre (EROC). They are assessed, can avail of language lessons and counselling and receive orientation about their new county. In the medium term, they move on to alternative housing.

The Department of Justice has attempted to distribute the incoming refugees from Syria and elsewhere in as many centres as possible.

As with direct provisions centres, some EROC facilities have been established in former hotels, which closed during the recession.