‘Whenever I need guidance about what to do in health . . .I read what Micheál Martin did . . . and then I do the exact opposite’ 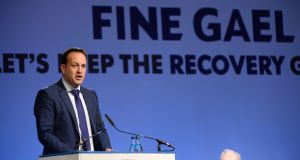 Fine Gael founded the State and saved it following the bailout and economic crash, Minister for Health Leo Varadkar has claimed.

Mr Varadkar was addressing a session on healthcare at the Fine Gael ardfheis in the Citywest Hotel, Dublin, on Saturday morning.

He said Fine Gael now has the opportunity, for the first time its history, to be re-elected to government. “We here in this room, on this winter morning in Dublin, can imagine something our forebears never could,” the Dublin West TD said. “The re-election of a Fine Gael Government and Taoiseach for the first time in our nation’s history. A feat achieved by Cumann na nGaedheal, but never by us.

“This week five years ago the USC, FF’s austerity tax, appeared in our pay slips for the first time and we endured the ultimate humiliation of foreign men arriving in our capital to run our affairs once again. And so, it fell to this party, Fine Gael, the party that founded the State, to save it. And save it we did, based on sound policies and the hard work of the Irish people.”

In response, Fianna Fáil accused Mr Varadkar of “pontificating” and said he is presiding over chaos in emergency departments. Clare TD Timmy Dooley, Fianna Fáil vice president, said: “Minister Varadkar promised a hundred new beds to ease the crisis. However, these still have not been delivered. He says he can’t get the staff, but why did he make the promise if he couldn’t deliver on it.”

Mr Varadkar said there are still problems with the health service and said he visited seven emergency departments over the New Year period and “met with patients on trolleys and in pain”.

“I listened to their stories and it made me even more determined that the Government should finish the job and translate a healthy economy into a healthy society.”

He said that health spending is not a bottomless pit, and that money is spent on developing services. “We will introduce the next phases of universal healthcare in a second term, including free GP care for all children, a new scheme to lower the cost of medicines, a new focus on managing chronic disease in the community rather than in hospitals and enhanced home care provision to keep people in their own homes for longer.

“Whenever I need some guidance about what to do in health I just look back through the files and read what Micheál Martin did when he was minister and the country had lots of money. And then I do the exact opposite.”

Earlier in the session, Meath East TD Regina Doherty said Fianna Fáil and its party leader Micheál Martin, ran from the “blatant” problems with the health service by “just throwing money at it”.

She also said it was rich of Fianna Fáil to criticise Fine Gael’s sense of fairness when it cut welfare payments for carers, the disabled, widows, as well as reducing the invalidity pension. Ms Doherty said Fianna Fáil are the “same old, same old from the high tax, high spending” party.

Deputies Peter Fitzpatrick and James Bannon praised the roll out of free GP care for under sixes and the over 70s, and called for it to be extended to everyone.

Fingal councillor Ted Leddy called on the Department of Public Expenditure and Reform and the Office of Government Procurement to speed up ways of making the cost of medicines cheaper.

Kieran Allen, from the young Fine Gael national executive, called for the enhancement of the physical education curriculum in both primary and secondary schools. “The longer our young stay exercising, the more more chance they will take up sports,” Mr Allen said.

Wexford TD Liam Twomey said: “We are actually living longer but we are not living healthier, unfortunately including our children. For the next five years, it is time for us genuinely to reorganise our health services.”