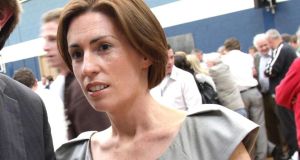 Senator Hildegarde Naughton (above) has a “strong public image” but “poor knowledge of the political landscape”. Photograph: Joe O’Shaughnessy

Fine Gael could be damaged in Taoiseach Enda Kenny’s Mayo constituency because of “real concerns over perceived lack of Government delivery”, according to internal party documents.

The assessments, carried out for the Fine Gael national executive, also say parts of the county, including Mr Kenny’s hometown of Castlebar, have seen drops in support for the party.

Fianna Fáil and Sinn Féin “will be doing everything possible to remove the Taoiseach”, it adds, with Fianna Fáil’s Dara Calleary described as the “golden boy”’ to take out the Taoiseach.

Cavan-Monaghan currently has three party TDs, but the local organisation acknowledges that holding two is the best possible result.

Deputy Joe O’Reilly “has a major challenge to retain his seat and a strong plan is required on the ground to knock on doors”.

The entry for Sean Conlan, recently embroiled in controversy over an Employment Appeals Tribunal hearing and a row over jewellery, reads: “Some recent media headlines may have some impact on Sean’s vote however there still remains a strong loyalty to the Conlan name in Monaghan.”

Heather Humphreys’s appointment as Minister for Arts was “a significant honour . . . however it does take her away from the constituency”.

In Kildare South, Fine Gael TD Martin Heydon is seen as having delivered for the constituency.

“On the negative side, the committee pointed to his lack of engagement with local radio and perhaps local papers. They feel that he would need to put in place a media strategy to address this shortcoming. The other view is that Martin is reactive rather than proactive. In general though the view is that the organisation will work hard to get Martin back to the Dáil and that he well deserves it.”

Mr Heydon may face a challenge from Renua Ireland’s Jonathan Irwin, who is close to the “horsey set in Kildare and deeply involved in charity activity”.

In Kerry, Fine Gael Senator Tom Sheahan is criticised for not putting more effort into the party.

“Sheahan, it has been noticed has not made a significant effort in the area of affiliations and national draw efforts in recent years, so it seems his attitude is that if he is selected, it will be done on his merit at convention rather than on party ground work.”

“Feedback from others is quite lukewarm, and he can seem disinterested in national politics and even running for this election.”

Constituency colleague Sean Kyne is “shy” but there is a “certain appeal to his lack of backslapping and his quiet honesty”.

Senator Hildegarde Naughton has a “strong public image” but “poor knowledge of the political landscape, and the potential candidates from other parties”.