Today's Dáil was adjourned after angry exchanges over rental strategy as the chamber descended into a shouting match. 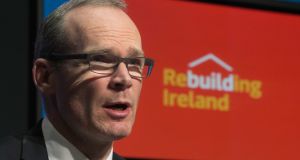 Minister for Housing, Planning, Community and Local Government Simon Coveney had insisted the 4% rate would not be altered and received the backing of the Taoiseach and the Fine Gael parliamentary party. Photograph: Gareth Chaney/Collins

The Government has agreed to slightly alter its rental strategy after reaching a compromise with Fianna Fáil.

Minister for Housing Simon Coveney and Fianna Fáil spokesman on housing Barry Cowen held a series of meetings Thursday in a bid to have the package passed through the Dáil this week.

In response to concerns raised by Mr Cowen there will be a number of changes to the strategy including a potential extension of the rent pressure zones.

The rent increase cap will remain at 4 per cent despite Fianna Fáil insisting it was too high.

Mr Coveney had insisted they would not alter this rate and received the backing of the Taoiseach and the Fine Gael parliamentary party on this.

Fianna Fáil did secure an early examination of a number of areas that have seen excessive rent increases.

The Residential Tenancies Board (RTB) will be asked to look at trends in Waterford, Limerick, Galway and the commuter counties Louth, Meath, Wicklow and Kildare.

The RTB will be asked to report back by the end of January and a decision will be taken then on whether the package should be extended to those areas.

Fianna Fáil believes this is a commitment to extend the package but Mr Coveney said he would not make any decision without concrete evidence.

There was also an agreement to fast-track the start date of the working group examining tax incentives for landlords.

Fine Gael TDs believe the Minister for Housing won the battle over the Opposition party.

However, Fianna Fáil is insisting it will benefit in the longer run if a number of other areas are included in the plan.

In a statement, Mr Cowen said the party had not achieved everything it sought but insisted its changes will benefit 100,000 additional households.

He said: “Convincing Fine Gael to accept rent control in areas of high pressure is a major achievement. Our research suggests that this will benefit 150,000 households in the first instance and a further 100,000 from next month.

“It is a source of some regret that Minister Simon Coveney failed to consult in any meaningful way with my party or I in advance of his announcement of the details of this scheme. It has caused unnecessary and counter-productive friction.

“However, I am pleased that for the first time in the history of the state, the Dáil is now in a position to introduce rent certainty measures that will protect tenants and help address some of the issues currently distorting our rental market.”

People before Profit, the Anti-Austerity Alliance and Sinn Féin criticised the backroom discussions between Fianna Fail and Fine Gael.

Mr Murphy said the measures will mean a 12 per cent increase in rents in Dublin and Cork over the next three years.

The Minister has denied this claiming it is a misrepresentation of the fact.

Mr Coveney said: “People are trying to exaggerate for effect. We have said that we will continue to respect what is in place at the moment - a 24 month rent review requirement until the next review so nobody’s circumstances are changed in terms of when the next review takes place.

“Only after that takes place will limitations of the rent pressure zone apply and annually after that.”

Irish hauliers say they will be ‘between a rock and a hard place’ post-Brexit 00:51
Downing Street moves to give spies licence to commit crimes 00:07
Dunnes Stores set to enter grocery delivery market 00:01
Ryan says lack of airport testing for Covid due to health service advice 22:00
Attention turns to final rounds of CAO 21:58