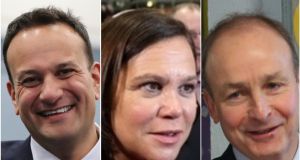 The Dáil business committee has decided that the next meeting of the Dáil on Thursday, March 5th, would not include nominations and votes for a taoiseach.

Fine Gael and Fianna Fáil are to hold discussions on policy next week, Taoiseach Leo Varadkar told his party last night, in an indication that the two parties are edging towards negotiations on forming a coalition government.

But there will be no votes to elect a taoiseach when the Dáil meets next week, meaning that it is likely to be another month – and possibly considerably longer – before a new government can be formed.

Talks continued between the parties at Leinster House yesterday, with further sessions scheduled for today and next week. But all sides admit that the process remains at an early stage and is making slow, if any, progress.

Yesterday the Dáil business committee decided that the next meeting of the Dáil on Thursday, March 5th, would not include nominations and votes for a taoiseach. There was little prospect of any candidate getting a majority.

Mr Varadkar told the Fine Gael parliamentary party last night that he did not believe there was a basis for appointing a negotiating team, but that the party would hold a one-day policy seminar with Fianna Fáil next week. Mr Varadkar said that he would meet the Fianna Fáil leader Micheál Martin after the event for further discussions.

In a statement, Fianna Fáil said it would participate in the policy exchange next week and that “serious work now needs to be done to create a programme for government to deliver demonstrable change in the areas of health, housing and climate change”.

But Sinn Féin finance spokesman Pearse Doherty was critical of the decision to defer the votes next week.

Saying he understood that there would be no outcome from it and further votes would be required, he nevertheless argued that such votes were an important stage in the process of government formation.

“Failure to have that to me will withdraw momentum from this process and allows people to sit back,” he said. “We can’t sit back. There are real big issues that need to be dealt with.”

Earlier the Sinn Féin health spokeswoman Louise O’Reilly told the Irish Times Inside Politics podcast that a government of Fine Gael, Fianna Fáil and the Greens would have “democratic legitimacy” if it could command a majority in the Dáil.

“If the government can be formed and voted by the Dáil I wouldn’t dispute the democratic legitimacy of it. However, it is neither fair nor credible to disrespect the mandate of the party that got the most votes in the election,” said Ms O’Reilly.