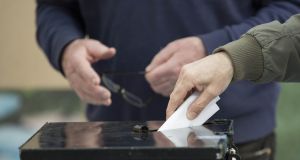 Fine Gael is set to add a former poll-topping Labour councillor to its election team in Cork East.

Fine Gael is set to add a former poll-topping Labour councillor to its election team in Cork East this weekend while Fianna Fáil will add the daughter of a former TD to its ticket in the same constituency.

Fine Gael will announce on Saturday that it is adding Fermoy based Cllr Noel McCarthy to its ticket, joining sitting TDs David Stanton from Midleton and Tom Barry from Killavullen in the four seat constituency.

Cllr McCarthy topped the poll in last year’s local elections in the Fermoy Electoral area with 20 per cent of the vote when he polled 3,511 first preferences to take the first seat in the six seat electoral area on the first count.

The only Labour councillor nationally to buck the downward trend for the party in the 2014 local elections, Cllr McCarthy announced last month that he was resigning from the party to run as an independent but then said he was considering an offer from Fine Gael to run for the party.

Fine Gael is set to unveil Cllr McCarthy tomorrow as its latest recruit. But Cllr McCarthy confirmed to The Irish Times on Friday that he will be contesting Cork East for the party and hopes to become the first TD from Fermoy town since Myra Barry stood down in 1987.

“I am a member of Fine Gael from Saturday on and I will be added to the ticket on Saturday. I’m no under illusions, it going to be a tough challenge. I have two very good running mates in David Stanton and Tom Barry but I’m going to give it a real go,” said Cllr McCarthy.

“Hopefully, the people of Cork East will give me the chance to become their TD, particularly the people of Fermoy where they haven’t had a TD from the town for over 27 years since Myra Barry represented them . It’s a long time for Fermoy to be without TD representation.”

Meanwhile Fianna Fáil sources have confirmed that Barbara Ahern, daughter of former TD Michael Ahern, has been added to the party’s ticket in Cork East. Party members will be briefed on the development at a Comhairle Ceanntair meeting in Fermoy on Friday night.

The addition of Ms Ahern restores the established partnership which existed for almost 30 years when Ms Ahern’s father, Michael and Cllr O’Keeffe’s father, Ned held two seats for the party from 1982 right through until 2011.

Many Fianna Fáil activists felt that the running of two candidates in 2011, when Michael Ahern and Cllr O’Keeffe, both ran cost the party a seat but Fianna Fail’s Constituency Review Committee feel that a second candidate in the south is essential to the party’s chances of regaining a seat.

The addition of both Cllr McCarthy and Ms Ahern to the election races brings to 12 the number of declared runners in Cork East which is currently represented by Mr Stanton, Mr Barry, Labour TD Sean Sherlock and Sinn Fein’s Sandra McLellan who is stepping down at the end of the Dáil term.