Controversy over influence of Clearing House Group on public policy 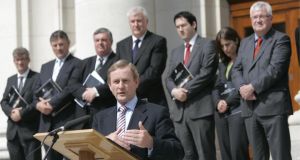 Taoiseach Enda Kenny has insisted the Government dictates public policies and that the Clearing House Group is a forum in which to share ideas and research. Photograph: Dara Mac Dónaill

Banks and multinational firms successfully lobbied the Government for a range of taxation and legal incentives to be introduced in the 2013 budget.

Lobbying documents obtained by The Irish Times indicate that the Clearing House Group – a controversial gathering of financial industry executives, accountants and senior civil servants – helped to secure at least a dozen separate measures in the Finance Act for 2013. This is the legislation which enacts budget measures.

Proposals sought by the industry group which ended up in legislation included:

While Government and the financial industry argue that the resulting measures were aimed at creating badly needed jobs, critics say the group is too secretive and wields a disproportionate amount of influence on the Government.

Other changes to the finance legislation sought by the group included technical amendments to legislation aimed at enhancing the type of tax relief available to some categories of firms.

In some cases, sections of proposed legislation were drafted by the industry and then put to the Department of Finance for consideration.

Driving policies
Tax equity campaigners and public representatives such as MEP Nessa Childers say the influence of the group is unhealthy and indicates that the industry is driving policies in its own interests.

However, Taoiseach Enda Kenny has insisted the Government dictates public policies and that the Clearing House Group is a forum in which to share ideas and research. Since the group was established in 1987, for example, he says the IFSC has grown to employ 33,000 people and to contribute more than €1 billion annually in corporation tax and payroll taxes.

‘No secrecy’
“Clearly, this is an important and potentially expanding area of financial services with great possibilities for future employment,” he told the Dáil recently. “The fact that the minutes are published means there is no secrecy about it, because the issues are there for people to tease out.”

The Clearing House Group, which meets monthly, is chaired by Martin Fraser, the State’s most senior civil servant.

It includes other senior public servants from the Department of Finance and the Central Bank, the financial industry’s regulator, along with firms such as Citi, Bank of Ireland, KPMG and PwC.

Following claims that it was too secretive and gave the financial services industry unprecedented access to Government, the Government began publishing minutes of its meetings last year, but the work of its sub-groups continues to be done behind closed doors.

Labour TD Kevin Humphreys has argued that sub-groups linked to the Clearing House – which focus on areas such as asset management, banking, funds and insurance – wield more influence than the overall organisation.

Documents for these sub-groups – seen by The Irish Times – show the extent to which many of the measures sought were contained in the most recent finance Bill.

A number of proposals put forward ended up being rejected by the Government.