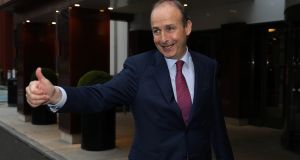 The Fianna Fáil leader Micheál Martin is set to be elected taoiseach with the support of Fine Gael and the Green Party when the Dáil meets this morning, after the three parties announced their members had voted to endorse the coalition deal last night.

Mr Martin will later today form a government with representatives from all three parties, announcing his Cabinet to the Dáil before travelling to Dublin Castle where the new ministers will receive their seals of office from President Michael D Higgins and then hold their first meeting.

The way was cleared last night for the historic coalition between the two age-old rivals of Irish politics and the Green Party when the results of ballots of the respective memberships were announced.

While Fine Gael and Fianna Fáil comfortably endorsed the programme for government as expected, the Green vote – the last to be announced in an evening of political drama – delivered an unexpectedly thumping majority in favour of entering government.

The result of the Green vote was announced after 8.30pm, following a lengthy count which began at lunchtime. It showed that 1,435 members voted in favour of the coalition deal, with 457 casting their ballots against the proposal – a winning margin of 76 per cent to 24 per cent, comfortably ahead of the two-thirds majority required by the party’s constitution.

Welcoming the result, party leader Eamon Ryan said there was “work to be done”. He looked forward to a “better economic system, one that really looks after all our people and looks after nature, because without nature, there is no security for any of us”.

Green deputy leader Catherine Martin appealed to party members who opposed the deal to come together with its supporters. “I know many Green members will be sceptical of serving in a government with Fianna Fáil and Fine Gael,” she said. “We will ensure it will be a government of mutual respect.”

Earlier, following the announcement that Fine Gael members and elected representatives had overwhelmingly backed the coalition, Taoiseach Leo Varadkar said his party had a “strong mandate” to enter government after the vote.

“Fine Gael is going to enter a third term of government, and this new coalition, united and strong, is up for the challenge,” he said.

Mr Varadkar will vacate the office this morning on the election of Mr Martin, but return as taoiseach in December 2022, under the terms of the agreement between the three parties.

Mr Martin described the vote by Fianna Fáil to form a government with its old rivals as “unique” and “historic”. There had been a “very energetic debate” at all levels of the party. “I think we are much the better from that exercise and from that energy,” he said. He thanked those who campaigned for a “no” vote saying it was done in a “very respectful, very democratic” manner.

The Dáil will meet at 10.30 this morning in the National Convention Centre in Dublin which is large enough to allow for social distancing among TDs. Once Mr Martin is elected, the House will be adjourned to allow him travel to Áras an Uachtaráin where he will be formally appointed by the President. He will then travel to Government Buildings where the Cabinet will be selected before returning to the Dáil to introduce his ministers and seek Dáil approval for the appointments.

It is also expected Mr Martin will announce his 11 nominees to the Seanad – as agreed with Mr Ryan and Mr Varadkar – which will enable the Upper House to meet on Monday and pass a vote renewing the Offences Against the State Act. Unless such a vote is passed by midnight on Monday, some sections of the anti-terror and anti-gangland legislation will lapse.

Opposition parties focussed their criticisms on the Greens.

Sinn Féin finance spokesman Pearse Doherty said people had “voted for change in the general election; they voted for a fresh start and for a new beginning.

“Faced with the prospect of a government of change, the two old parties have come together to circle the wagons to exclude Sinn Féin, and they are using the Green Party as a fig leaf to do this,” he said.

People Before Profit said the Greens had “abandoned any project for radical change on climate, housing, health and economic justice”. The party said it would hold a protest outside the convention centre today.