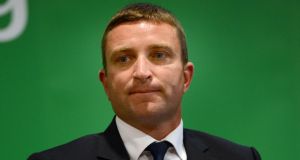 A Bill to be published by Fianna Fáil proposes to give illegal immigrants an opportunity to acquire residency rights and have their status regularised.

It is estimated there are 25,000 to 30,000 illegal immigrants in Ireland, including people who have overstayed their entry visas or who were refused asylum status.

The Migrant Earned Regulation Bill, 2015 is the idea of Fianna Fáil justice spokesman Niall Collins and shares some characteristics with legislation proposed by Senators John McCain and Ted Kennedy in the US in 2005.

Mr Collins’s Bill proposes a scheme where illegal migrants can “earn” the right to have their status regularised.

It would allow participants to accrue credits in a number of categories including employment, USC contributions, income tax, evidence that a parent was caring for a child or dependent relative, educational qualifications and continuous residency.

If the participant has accumulated the required number of credits when the scheme ends, they can they apply for long-term residency.

Mr Collins said: “The rationale of this is that it is the right thing to do. There are 25,000 to 30,000 people in Ireland who are undocumented. Do you ignore the problem or try to deal with the problem?”