FG rebels register with commission as a ‘third party’ 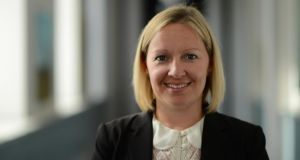 Lucinda Creighton: “There is no party and there has been no discussion about setting one up.” Photograph: Cyril Byrne

The Reform Alliance, comprised of breakaway Fine Gael TDs and Senators, has registered with the Standards in Public Office Commission as a “third party”.

The move will allow the group of five TDs and two Senators to raise funds and accept donations, but “third party” registration does not mean a separate political party is being established.

Roscommon deputy Denis Naughten, a member of the group, said registration was primarily a device that will allow the group raise funds to carry out political research.

He said the group receives no exchequer funding under the leader’s allowance, unlike political parties and independent TDs and Senators. That is because all were elected as members of Fine Gael but the party still receives funding for each of the seven parliamentarians despite them being outside the parliamentary party.

“Fine Gael continues to receive public funding of over €40,000 for each of the TDs [in the Reform Alliance]. That funding should be handed back to the exchequer.

“Because of that there is no mechanism to allow us obtain independent research and this will allow us to raise funds,” said Mr Naughten.

Not political party
Another leading member of te group Lucinda Creighton also emphasised that the Reform Alliance was in the process of registering as a “third party” and not as a political party.

Asked about reports of informal talks having been conducted with Stephen Donnelly on joining a new party, Ms Creighton, a TD for Dublin South East, said there had not “as there is no party and there has been no discussion about setting one up”.

Independent candidate
Mr Naughten dismissed the suggestion that the registration was a preliminary move to becoming a political party. He said his understanding was that “third parties” were specifically precluded from standing for election.

“My understanding is that the third party will have to be disbanded [to allow its members stand for election].”

He said it was his intention to stand as an independent candidate in the next election.

The Commission defines a third party as “any individual or group, other than a registered political party or election candidate, who or which accepts, in a particular calendar year, a donation for political purposes exceeding the value of €100.

Of the seven, only Mr Walsh declined to join the alliance.