FG loads up on ammunition for campaign

Miriam Lord: Forget the Five Point Plan – the 94 Initiatives are where it’s at now 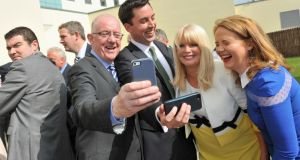 What? No starting pistol?

Perhaps the animal welfare people had a word in Fine Gael’s ear – the party is holding its annual think-in next door to a wildlife park.

It would never do to frighten the animals – apart, obviously, from awkward ministers and backbenchers. The regime considers them fair game.

Or maybe party strategists thought it best not to allow the Taoiseach handle a firearm while Leo Varadkar grazed within range.

So no gun was fired on the lawn behind Fota Island Hotel yesterday.

The party leader didn’t raise his arm and blast an air-horn into the east Cork stillness, although he might as well have done it.

Because we all heard the noise in our heads. It was far from subtle and it was the unmistakable sound of the off.

Fine Gael’s backroom boys and girls have been working hard. The hymn sheets are complete, collected and bound.

Never mind that old Five Point Plan. It belongs to another time. They were innocent days, back in 2011, when the party put forward five foolproof proposals guaranteed to save the nation. Nobody likes to talk about that now.

Labour is in on this too. You’ll be hearing a lot about the “revised economic strategies” from now on.

The GPS – Government Protection Strategy – seems to be working well. A year or more out from an election and the Coalition is following a very clear and predictable course.

The tone has changed. Henceforth, the message going out will be a positive one.

Speaking to journalists before the parliamentary party went into private session to think great thoughts of hanging onto their jobs, Enda set out his stall. He is waving goodbye to the bad times: “We are not going back there.” The government is moving “forward” with “a managed competency”.

Minister for Finance Michael Noonan stood beside the Taoiseach at the press briefing.

“There’s been quite a lot of economic good news over the summer – I don’t need to recite it” he grinned, but he did anyway. “Ya know, everything from car sales to retail sales up for four quarters in a row, manufacturing output up . . . ”

Then he grinned again. “This didn’t happen by accident.”

In the coming year, Mr Noonan may find he has to constantly remind the electorate of this.

To underscore Fine Gael’s boundless appreciation of his accomplishments, the Taoiseach wished Michael all the very best as he prepared to leave for Milan to bat for Ireland on the IMF loans.

The third person behind the microphones was Justice Minister Frances Fitzgerald. It later emerged that she has been appointed to head the party’s election committee.

Does that make her the new Big Phil? If she steps into his shoes she could row them back to Dublin today.

Meanwhile, the comedy element of the two days was supplied courtesy of the supposed spat between Enda and Leo Varadkar.

Given that yesterday’s think-in marked the first major set-piece event of the new political year after the long break from the usual politics, the media was consumed with excitement over the prospect of a row between the Taoiseach and his Minister for Health.

In comments earlier this week, Enda was judged to have delivered “a slapdown” to Leo, as if the pair of them were professional wrestlers.

First big name to arrive was the former minister, James Reilly, who must have thought he had mistakenly taken the wrong turn and gone in the gate for Fota Wildlife Park when he was set upon by a pack of ravenous hacks baying for quotes.

James didn’t want to say anything. “I’m late, I don’t want to get into trouble with the boss man,” he squeaked, moving as fast as he could. Which wasn’t very fast. The pack moved in. What Leo’s slapdown? (Leo having told tales out of school about the forthcoming Budget and, in particular, what money needs to be given to Health).

If relations are frosty between the two, a thaw of sorts set in during the private session. Leo, who was addressing the meeting on health issues, said he was particularly impressed by one of his predecessors. Seán Flanagan was a former Mayo footballer and health minister back in the 1950s. Varadkar said he liked the way Flanagan “was opinionated but he was direct”.

The crowd applauded and Enda stood and embraced his feisty minister.

“What we want to do is not get into a position where people tend to divide what happens in government. We have a single objective here – I appointed this man to be our Minister for Health. He’s going to do that job and the Government is going to help him in making difficult choices . . . So just get that into your heads now. Myself and Leo are two members of the Government and part of the team to sort out our country.”

And everyone went off happily to dinner.

But it was just as well they didn’t give Enda that gun.