Harry McGee meets the hot favourite to become next Taoiseach Leo Varadkar and asks him about the pressures of the job, building bridges with Simon Coveney and his plans for the first 100 days. Video: Enda O'Dowd 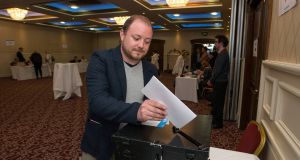 Minister for Social Protection Leo Varadkar remains the strong favourite to be declared the new Fine Gael leader when the votes in the leadership election are counted on Friday afternoon, with a result expected before 6pm.

Voting for the parliamentary party commences at 8am on Friday morning, with both sides expressing optimism about the outcome, but little sign that Simon Coveney has achieved the comeback necessary to overhaul the lead enjoyed by his rival Mr Varadkar.

Both candidates were engaged in a final round of last-minute campaigning on the phone on Thursday night, with sources saying Mr Coveney was urging TDs to change their declared intention.

Mr Varadkar also has the support of 119 councillors, with 74 backing Mr Coveney and 42 undeclared.

About 21,000 Fine Gael members were eligible to vote, though party officials expect a turnout of about 50 per cent

Voting for members and councillors, which has been ongoing at locations around the country since Monday evening, concluded on Thursday night. The polls will open at Leinster House for the party’s 73 TDs, senators and MEPs on Friday morning. About 21,000 Fine Gael members were eligible to vote, though party officials expect a turnout of about 50 per cent.

The polls in Leinster House for the parliamentary party will close at noon. Meanwhile, ballot boxes from polling stations around the country will be transferred on Friday morning to the Mansion House in Dublin, where the count is expected to begin at 2pm.

The result of each vote will be declared after it is counted. A big victory for Mr Coveney amongst the members could indicate that a shock is on the cards, though there was little expectation of this amongst Fine Gael sources on Thursday night.