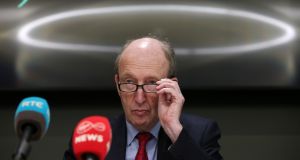 Minister for Transport Shane Ross has defended his decision to grant €5 million funding to Waterford Airport by saying if he had not done so it would have been the “death knell” for the facility.

The airport has had no passenger flights for the past three years after a service to Luton Airport was withdrawn. At that stage, annual passenger numbers had fallen to 13,700, less than a tenth of its peak of 144,000 in 2008.

The decision to award the grant was taken against the advice of the Department of Public Expenditure and Reform.

Mr Ross has said the Exchequer funding, in addition to another €7 million being raised by private investors and three county councils in the south east, will allow the airport to extend its runway from 1,433 metres, to 2,228 metres. This, said Mr Ross, would accommodate large commercial passenger aircraft such as Boeing 737s and Airbus 320s.

Mr Ross’s Independence Alliance colleague, John Halligan, is a TD for Waterford and has long campaigned for the airport. He facilitated a meeting at the airport with local campaigners, public representatives and business interests earlier this year.

Defending his decision on Friday, Mr Ross said: “We looked at this very, very closely and I decided that there are risks involved in this, but the fact of the matter is the Government is only putting 40 per cent into it and private investors and local authorities are absolutely convinced, putting their money on the line.

“If I was to refuse that, I would obviously be signing the death knell of Waterford Airport.”

For his part, Mr Halligan, who is Minister of State for Training and Skills denied the Government decision was “parish pump politics”.

Mr Halligan told RTÉ radio’s Today with Sean O’Rourke show that the South East deserved the same infrastructure as the rest of the country. He also claimed that €5 million was a “small amount”.

“I genuinely think that the spin-off exceeds the €5 million investment (by the Government).

“For anyone to say that is just someone stumping up for Waterford. That’s not the case.”

A number of local companies, including Glanbia, Leadmore Investment Company, Dawn Meats, Coolmore Stud and Stafford Wholesale Ltd are among the private investors who have pledged a total of €5 million. Waterford, Kilkenny, and Wexford county councils have also committed to inject a further €2 million into the airport.

Mr Halligan said that he would approach the project on an “if we build it they will come” basis.

“The business will be there once jets can land,” he added. “I’m absolutely convinced that the investors would have done their assessments.”

Industry sources said that the only realistic operator once the runway was extended would be Ryanair and the airline has shown no indication to date it would be interested in using the airport as a base.

There are a number of conditions attached to the €5 million, including the airport being able to demonstrate that the extension can be delivered for €12 million, and it will only be paid when all upgrade works are completed and the runway is confirmed to be ready for service by the Irish Aviation Authority.