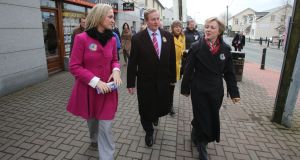 Voting is under way in the Meath East byelection this morning.

The two leading candidates last night expressed confidence they would win the seat.

Fine Gael ’s Helen McEntee said she was “a little nervous but optimistic” about her chances of winning the seat left vacant after the death of her father, the minister of state for agriculture Shane McEntee, last December.

“Because I have spent the last two and a half years working on behalf of the people of Meath East, and while I could never fill my father’s shoes, I can promise to work just as hard as he did,” she said.

Her closest rival is considered to be Senator Thomas Byrne from Fianna Fáil. Last night he said he had conducted the “most comprehensive and most constructive campaign” and there was a growing sense that the constituency needed an opposition TD.

“There has also, I think, been a growing consensus that I have the passion and skills to articulate a fairer way to recovery on behalf of the people of Meath East. Our canvass returns have been very encouraging,” he said.

No opinion polls have been conducted in the constituency but over the past 24 hours bookmakers have shortened the odds for Mr Byrne and as of last night were offering odds of 5/6 for both him and Ms McEntee.

Strategists for the four major parties agree it is going to be a very tight race and the outcome will depend on turnout and transfers. In a byelection held in Meath in 1995, the turnout was 42 per cent but it is widely expected that it will be lower than that.

That analysis is based on a midweek polling day, the closing of voting stations an hour earlier than normal at 9pm (which may affect the voting levels of commuters); as well as the weather forecast which predicts cold and inclement weather.

Ms McEntee is said to be stronger in the more traditional and rural north of the constituency around her Nobber base, with Opposition candidates likely to perform stronger in the south, which has a large commuting population.

Much will depend on the relative performances of Sinn Féin and Labour and how the votes from both parties will transfer. If Labour finishes fourth and on a single-digit percentage, it may put pressure on the party to reappraise its Coalition strategy.
The Labour candidate Eoin Holmes said that voters had really engaged with him on the door and reiterated his message that he would be best positioned to influence Government direction if elected. He said it “remained to be seen” if he could retain the 20 per cent vote share the Labour Party attained in the 2011 General Election.

Sinn Féin candidate Darren O’Rourke dismissed the analysis that it would be a two-horse race, saying the strong feedback his party has got is that he will be “neck and neck ” with Fianna Fáil.

“We have had a real resonance with voters. We are standing outside the consensus of cutbacks and austerity,” he said.

A last-minute row broke out over comments by Ms McEntee on RTÉ’s Prime Time where she seemed to suggest there was a possibility for more estates to be exempt from property tax.

In the Dáil yesterday, Taoiseach Enda Kenny said, if elected, it would be open to her to lobby on that matter and make a case. Fianna Fáil claimed that this amounted to the Taoiseach dismissing the possibility.