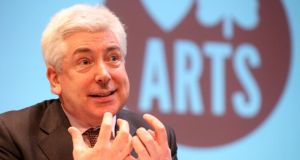 Minister of State Alex White: “I am not saying I am in favour of that.”

The Government has indicated people may have to pay charges under its scheme to provide free GP care.

Alex White, the Minister of State at the Department of Health, has raised the propspect of applying some fees to ensure people do not abuse the system.

However, Mr White said such a fee would not apply to the scheme for free GP care for children under six, due to be rolled out this year.

He said it could be put in place for everyone over the age of six. The Government plans to introduce free GP care for the entire population by the end of its term, in spring 2016.

While Mr White told The Irish Times that applying a “nominal” fee was not something the Government wanted to do, it may be necessary to avoid needless abuse of the scheme.

His statement potentially puts him at odds with Minister for Health James Reilly. Dr Reilly last year said free GP care “at the point of use” means “free – full stop”.

Mirroring other systems
“The fact is there are other systems [in other countries] which have a very small charge, and I mean €5,” Mr White, a Dublin South TD said.

“The case is made that if you have a very small fee it helps people manage their behaviour or manage their attendance.”

The comments come after a discussion at a health seminar during the Labour Party conference in Enfield, Co Meath, at the weekend involving Mr White and Prof Charles Normand, Edward Kennedy chair in health policy management at Trinity College, Dublin.

During a question and answer session, Mr White was asked by a delegate if free GP care could evolve along the same lines as free third level education only for fees to “creep back in in the future”. Registration fees have been introduced at third level and increased after a period.

Mr White said a small fee applied in other European countries with similar GP and healthcare systems to that which the Government planned to introduce.

“Let me make this point though which you mightn’t like but just to put it into the equation ... there are systems which are universal access systems across Europe which are essentially free and the kind of system we want to implement here but where there are very nominal fees,” he said.

“I am not saying I am advocating that or in favour of it, I am just telling you that’s there in some of the systems we would like and we would admire.”

He said some countries applied small charges to deter people from attending GPs for relatively minor issues in a free scheme, when they would have stayed away in the past.

Mr White also said the legislation giving effect to last October’s budget promise to bring in free GP care for children under six would be published in the coming weeks. Draft legislation has been drawn up within the Department of Health and it is hoped the scheme will be in effect by the summer.

He stressed that the under-sixes scheme would come with no charges, nominal or otherwise.

“It is one of the things that could apply in the wider population scheme,” he said.