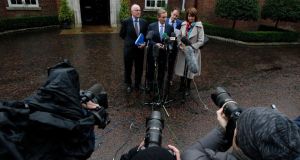 The relationship between Taoiseach Enda Kenny and Tánaiste Joan Burton will also be tested in the coming months, following some recent fraying. Photograph: Brian Lawless/PA Wire

If 2014 began a fracturing and reordering of the Irish political landscape, 2015 will be the year in which everything is up for grabs.

By next Christmas, if the Government sticks to its plans, we will be at most four months from a general election. Campaigns will be in place and the polls should give a better indication of whether the electorate will change its mind as it begins to think about the formation of a government.

The indications are the Coalition will go full term, or as closes as makes no difference, and go to the polls in spring 2016. Current poll figures offer no incentive to cut and run.

The Government’s first task of the new year is to turn the political dial down after a 2014 filled with controversy, punctuated by only the odd piece of good news. There is a belief in Government circles that the public has so tired of politics that even offering every home in the country a tax-free €1,000 would not help.

“There is a perception in Government Buildings that no matter what we say, people say: ‘Ah, you’re a shower of bastards,’” remarked one senior Coalition figure. “We have to break through beyond that.”

A relatively quiet first few months of the year can be expected to give the public a break. However, politicians are nothing if not creatures of ego, so they won’t disappear entirely. The Government has to control the agenda to a certain extent and be seen to govern.

Those in Fine Gael and Labour maintain 2015 will be the year when economic recovery is finally felt and people begin to see the difference in their own pockets. Certainly the thinking in both Government parties is the “what it means to you” question will be the key factor of 2015. If they can make people believe the recovery has finally improved their own personal circumstances, Fine Gael and Labour believe they too will be on the road to recovery.

The spring has the potential to be a defining period for the Coalition. A possible spring statement – perhaps with announcements on reforming property tax and capital investment – may help steer the debate firmly back on the economy, the ground on which the Coalition feels most comfortable fighting.

It is possible we will also see a pitch from the Government about where it sees the country going in the medium term – if not a vision of postelection Ireland then a broad outline of intentions beyond the purely economic.

But there are many issues that could derail those intentions.

There will be serious trouble for Enda Kenny if the findings are in any way adverse for him and Kenny’s leadership could also come under renewed pressure within Fine Gael if there is a further string of disastrous opinion polls in the opening months of 2015.

Falling to 19 per cent in the most recent Irish Times/Ipsos MRBI poll sparked an outbreak of the wobbles on the Fine Gael back benches. The problem for Kenny is the nervousness is beginning to spread beyond the usual suspects and into the ranks of middle-ground deputies, as well as junior and senior Ministers.

The likely emergence before Easter of a new party led by Lucinda Creighton may also increase nerves on the Fine Gael benches if Creighton begins to peel support away from her former party.

Those in Government Buildings have long cast a wary eye in the direction of Leo Varadkar and suspect his intentions on all sorts of issues. Simon Coveney and Frances Fitzgerald are seen as contenders too, should a vacancy at the top of the party arise. Michael Noonan’s name has also been floated but it is hard to see past the main three.

Yet is likely none will make a move and Varadkar’s positioning is more likely to be of the variety engaged in by Joan Burton under Eamon Gilmore’s leadership of Labour: ensuring you are seen as the natural heir should the leader fall.

Labour’s recent poll results sparked panic. The Tánaiste made noises about substantial reform of the universal social charge, yet she subsequently acknowledged the next budget will follow a template laid down by the last: adjustments to the USC, as well a cut to the top rate of tax and increasing the threshold at which people enter the top rate.

Labour felt bruised by Kenny and Noonan’s recent effort at defining the election as a choice between Sinn Féin and Fine Gael. Maintaining cohesion in Government while the the two parties position themselves, with Labour possibly fighting for its existence, ahead of an election will be a challenge.

On the Opposition benches, Fianna Fáil has held its position, even if it has been “becalmed”, in the words of Éamon Ó Cuív. After many rumblings, Micheál Martin will lead the party into the next election.

For both Fianna Fáil and Sinn Féin, 2015 will be about trying to continue their own strategies after scoring many tactical victories against the Coalition in 2014.

For Sinn Féin, that means continued and trenchant opposition to austerity and strengthening its hold as the main party of the left.

The year ahead will see ongoing questions of who will share power with whom after the next election. Don’t believe any of the answers: the postelection numbers, rather than any pre-election statements, will dictate who goes into office.

Yet one of the biggest questions facing Irish politics as it enters 2015 centres on the huge support currently enjoyed by Independents in opinion polls, hovering about the 30 per cent mark in a number of polls as 2014 closed.

Even Independent deputies in the current Dáil acknowledge the vote for candidates of smaller parties and none is unlikely to be as high come the next general election.

The formation of a new party or groupings – whether of the right or left – is likely to have some effect on Independent support. The Government parties will also continue to emphasise a message of stability as the year progresses, pointing to the dangers of multiple elections in one or two years, as Kenny has done already.

If 2015 is to be the year when people begin to ask themselves the question about who they want to form the next government, getting to define that question will be the key battle.

Sinn Féin will emphasise the repudiation of austerity. Fianna Fáil will stress the unfairness of the recovery and the Government’s approach. The Independents will focus on convincing the electorate they can be responsible in power.

For the Coalition, it will be about who people trust to keep the recovery going and whether the electorate feels better off than it did at the last election in 2011.

A sense of fragility heading into an election may help the status quo but recent poll figures suggest re-election of the current government is an unattainable goal, even if those in Coalition insist it can still be done.

“People don’t even start to engage in this stuff until they sniff and feel something is coming,” said one figure. “They’re not there yet by any means.”

This time next year, they will certainly be getting there. Game on,