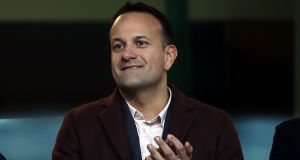 More than 200 messages sent to Taoiseach Leo Varadkar at the height of the controversy over Royal Irish Constabulary (RIC) commemorations varied from polite advice to borderline racist abuse, documents released under Freedom of Information show.

“I am writing to you today in total disgust,” a member of the public wrote to Mr Varadkar on January 6th. “Have you absolutely no clue of or any regard for Irish history?”

The letter is typical of the 200 messages directed at the Taoiseach over a five-day period after Government plans to commemorate the RIC and the Dublin Metropolitan Police (DMP) were announced as part of the Decade of Centenaries.

When do you plan to hold the Oliver Cromwell commemoration?

Like many others, the writer accuses Mr Varadkar and the Government of commemorating not just the RIC, but the notorious Black and Tans and Auxiliaries too, a charge the Government has repeatedly denied.

“When do you plan to hold the Oliver Cromwell commemoration?” queries another correspondent, according to documents released to The Irish Times.

Some messages showed a deep understanding of Irish history and the sensitivities involved, and many shared personal stories about their ancestors’ suffering at the hands of British forces.

“This commemoration will open old wounds and drive wedges between communities rather than achieving any form of reconciliation,” one person told the Taoiseach. “It is not too late to stop it and I urge you to do so.”

Many anticipated the impact of the commemorations on Fine Gael’s election chances. “Thank you Leo. You can update your CV now. You have just lost the [general election],” read one. Another predicted the “downfall of the bootlicking party”.

One correspondent, a former Fine Gael supporter, undertook to campaign for any opposing candidates because of the controversy.

Another promised that any Fine Gael canvassers calling to their door “will be treated like Black and Tans”. The same writer suggested that in 2020 “Fianna Fáil should erect a statue in your honour”.

The Taoiseach “managed to do what I thought was impossible after the recession . . . you’ve made Fianna Fáil look like the only option”, said one.

Curiously, given the final results of the election, several writers promised to switch to voting Fianna Fáil over the issue but only one mentioned Sinn Féin. And even then it was only to warn that the event would “empower” the party.

A significant minority of the letters personally insulted the Taoiseach. He was called a fascist, a muppet, a moron, an idiot and “a dirty traitor”.

Other, presumably more unpleasant, epithets were redacted by the freedom of information officer, who was perhaps worried about corrupting public sensibilities.

“You’re a treasonous Tory piece of [blank],” was one, not very mysterious, example.

Mr Varadkar’s part Indian parentage was a common theme, with some correspondents asking him to recall what the British did to the country of his father. A few asked how he would feel about India commemorating the British Indian army troops who carried out the Amritsar massacre in 1919.

A small number of the letters had nastier undertones such as one which stated that the Taoiseach did not have the right to decide what gets commemorated “as not all of his forebears lived in this country 100 years ago”.

One of the more cogent letters came from someone whose relative served in the RIC: “There is nothing wrong in remembering individual members and situations but a formal commemoration for the organisation and all its members is wrong.”

Not all the letters were critical. There were a handful of requests for tickets, including one from Fine Gael TD Tony McLoughlin on behalf of his constituents.

One letter, sent the day after the decision was taken to postpone the event, even said it was a “terrible pity” the Taoiseach gave in to the “ignorant rabble” who “will no doubt be back supporting their ‘British occupier’ football teams this weekend”.