Minister says law will have a ‘chilling effect’ on doctors 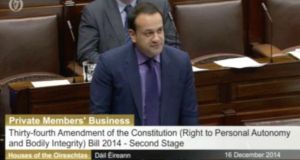 Minister for Health Leo Varadkar has said the constitutional restrictions on abortion are too “restrictive” and have a “chilling effect” on doctors.

Speaking in the Dáil on a private members’ bill tabled by Clare Daly, Mr Varadkar outlined his position on the eighth amendment, which gives equal rights to the mother and the unborn and advocated a more liberal abortion regime.

However, Mr Varadkar, while in favour of change, said the current Government has no mandate to change the current law, which would have to be done by referendum, and said he has no right to impose his own views.

He also said he does not “support abortion on request or on demand”.

“Speaking as Minister for Health, and also as a medical doctor, and knowing now all that I do now, it is my considered view that the eighth amendment is too restrictive,” he said.

Also in the speech, Mr Varadkar expressed support for abortion in cases of fatal foetal abnormalities.

“Similarly, it forces couples to bring to term a child that has no chance of survival for long outside the womb if at all. Forcing them, against their own judgement, to explain for weeks and months to all enquirers that their baby is dead.

“I have been present at stillbirths. I know it can be handled well and sensitively but I do not believe anything is served by requiring women or couples to continue with such pregnancies should they not wish to do so when there is no chance of the baby surviving.

“The eighth amendment continues to exert a chilling effect on doctors. Difficult decisions that should be made by women and their doctors, a couple or the next-of-kin where there is no capacity, and on the basis of best clinical practice, are now made on foot of legal advice. That isn’t how it should be.”

He said decisions to change the law cannot be rushed, but argued that it is time to ensure that the “politics of the ‘Moral Civil War’ are consigned to history as well”.

“Ministers for Health do not just represent their own private views, they are guardians of the nation’s healthcare, and must work to protect and safeguard all of its citizens,” the Dublin West TD said. “But perhaps people may be interested in where I am coming from.

“I consider myself to be pro-life in that I accept that the unborn child is a human life with rights. I cannot, therefore, accept the view that it is a simple matter of choice. There are two lives involved in any pregnancy. For that reason, like most people in the country, I do not support abortion on request or on demand.”

“The eighth amendment continues to exert a chilling effect on doctors. Difficult decisions that should be made by women and their doctors, a couple or the next-of-kin where there is no capacity, and on the basis of best clinical practice, are now made on foot of legal advice. That isn’t how it should be.”