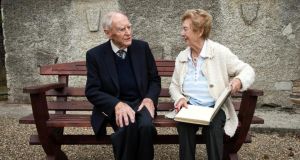 The 93-year-old former Fine Gael leader, whose State car was removed as part of recent Government cutbacks, arrived at Avondale House driven by his daughter Mary. Alighting easily from the small car, he may not have exactly bounded across the courtyard, but there was a sprightly lilt to his step as he approached a female committee member, hand extended.

“You are Niall’s daughter,” he asserted, before the visibly shocked woman confessed she was indeed Nuala, daughter of the late Lt Col Niall C Harrington (1901- 1981), although she said for many years now she had been Nuala Jordan.

The former taoiseach and Ms Jordan retired to a nearby bench from where the words “Do you remember...” and “Did your father ever mention the name…” could be heard.

“I really didn’t expect him to remember my father,” Ms Jordan told The Irish Times, adding it was a very emotional moment for her.

Inside the conference hall, Mr Cosgrave listened with rapt attention as DCU lecturer Colum Kenny recounted visits by Irish leaders to the US over the years, with special emphasis on the visit of Mr Cosgrave’s father WT Cosgrave, who had travelled as president of the Free State’s executive council.

Mr Cosgrave and his father were likely to be the only non-American father-and-son team to have both addressed the US congress, Mr Kenny said.

At the end of his address, a diplomatic chairwoman of the session, Finola Kennedy, asked whether “Mr Cosgrave or Mary perhaps [his daughter]” would like to reply.

Mr Cosgrave was on his feet immediately, and spoke at length of his family association with Irish America. He praised Mr Kenny’s detailed research, which was aided by photographs and insights not previously widely known.

Referring to the range of visits of Irish leaders covered by Mr Kenny, he said it had occurred to him that “it was a good job we were not all there together”.

He said the Parnell school had been “enlightened by the eloquence, the detail” of Mr Kenny’s address, which he said must have taken a considerable time to research.

He recounted a political anecdote on how Seán Lemass, who was taoiseach in the 1960s, had tired of the frequent threats of his minister for agriculture to resign. On one occasion, Mr Lemass had been told the minister had indeed submitted his resignation after being asked to deal with trade unions. However, a civil servant was able to tell Mr Lemass the resignation had been leaked to the media, but not received by the Government.

“When you have better news, ring me,” was the response from Mr Lemass, Mr Cosgrave related.

In his address, Mr Kenny said WT Cosgrave had been treated as something of a hero on his visit to the US and Canada, as he was the first leader of a free Irish State. He recalled both CS Parnell and WT Cosgrave had been involved in train crashes in North America - Parnell as he travelled to visit family in Alabama, and Cosgrave as the travelled to Limoges in Canada. While nobody was killed in Parnell’s accident, Cosgrave had earned great respect for wading through deep snow to tend to the injured and for praying over the body of the dead train driver, he said.