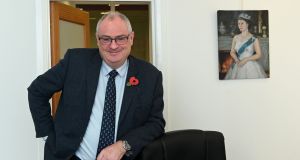 Politicians often use nautical terminology, though few of them know one end of a boat from the other. And then there is Steve Aiken, the new leader of the Ulster Unionist Party. In the past, he commanded Royal Navy nuclear submarines.

Aiken takes over as UUP leader on Saturday; it’s one one of the most difficult jobs in Northern Irish politics. Once dominant, the UUP has spent a decade or more searching for a role, playing a poor second fiddle to the Democratic Unionist Party.

An Assembly member for South Antrim since 2016, Aiken spent 32 years as a submariner in the Royal Navy, where he commanded two nuclear-powered submarines. He has worked at a high level at Nato and in Whitehall, and more recently was the founding chief executive of the British Irish Chamber of Commerce and, subsequently, chief executive of Dublin City University’s Educational Trust.

In April 2014, Aiken, then the founding chief executive of that chamber of commerce, was presented to Queen Elizabeth and President Michael D Higgins in Windsor Castle, when Anglo-Irish relations had never been better.

“Later that evening I was walking out with a group of people and we were laughing and we were saying, ‘what could possibly go wrong?’. Then Brexit comes along,” says Aiken in his constituency office overlooking the square in Ballyclare, a small town of 10,000 people just north of Belfast.

Aiken decorated the office himself: a portrait of the Queen, and posters from the first and second World Wars. Winston Churchill stares resolutely out from one wall, and beside him Lord Kitchener points his finger: “Your Country Needs You.”

Ten days ago he said the UUP would stand in all 18 constituencies. Earlier this week, he reversed his stand when it came to North Belfast – a move that improves Democratic Unionist MP Nigel Dodds’ chances of survival.

Dodds, is defending a majority of 2,000 against Sinn Féin’s John Finucane. There were concerns among local unionists that the UUP would split the vote and gift the seat to Sinn Féin.

The police had to be called after threats – including some allegedly from loyalist paramilitaries – were made. Insisting that the UUP did not, and does not bow to threats, Aiken says that he listened to the concerns of North Belfast unionist-leaning voters. They are “furious” about “the DUP putting a border down the Irish Sea”, but feel they have little choice but to vote for Dodds.

Inevitably, he faced criticism for his change of heart, and predictions that his leadership was effectively over before it had begun. “When you have to make a decision, you have to make it for the right reasons,” he says, strongly.

However, the UUP is now not the only party to stand down candidates. The SDLP, Sinn Féin and the Green Party are doing so in a few places to maximise the pro-Remain vote, in a race increasingly pitched as a Brexit battle between Leave and Remain.

Northern Ireland does not have “normal politics”, he argues, citing the two-year lack of an Assembly, and a toxic culture in Stormont where the basic rules of government followed elsewhere were ignored, leading to the Renewable Heat Incentive (RHI) controversy that led to its collapse.

“Government by the [republican] Felons Club and by unelected spads [special advisors] just doesn’t work, it has undermined people’s faith in democracy and that’s my biggest concern, that people are losing faith in the democratic process,” he declares.

Brexit, he says, has reopened the constitutional question. “It has reopened all sorts of discussions that had been left dormant, and it’s a much more complex beast because it’s opened up fault lines and seams across these islands.”

Unionists, however, do not want to be in a united Ireland. “Nobody in Ballyclare is talking about it,” he says. It is for this reason, Aiken emphasises, that Northern Ireland must remain in the EU. “We’ve got to remain for the union. We have to. We don’t really have any other option.”